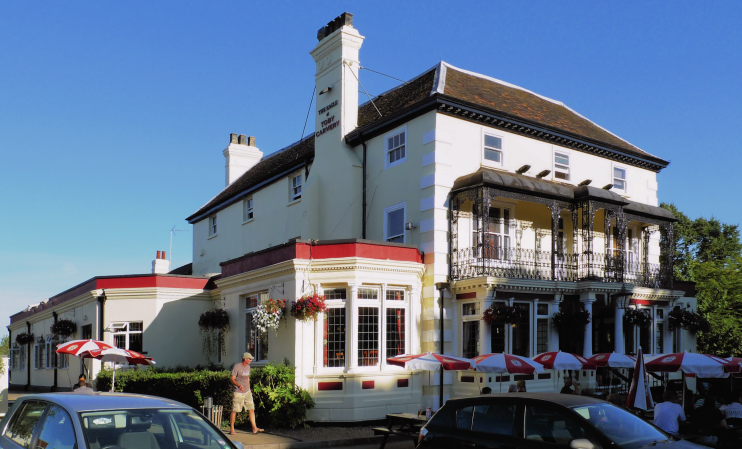 Snaresbrook’s name was first recorded in its present form in 1599; its first part is of uncertain origin, although it could be connected with the use of snares for trapping animals or birds in Epping Forest. The stream that gave the village its name is no longer visible above ground.

Snares­brook evolved as a coaching halt on the road to Epping in the late 17th century, when horses were changed at the Spread Eagle. Shown in the photo­graph above,* the present Eagle Hotel is of early-18th-century origin and is the oldest inn in Wanstead. Trag­i­cally, it’s now a Toby Carvery.

Most of Snaresbrook’s Georgian houses were built along the east side of Hollybush Hill, which still has its hollies. In 1843 Leopold I, King of the Belgians, opened the infant orphan asylum, which subse­quently became the Royal Wanstead School and is now Snares­brook Crown Court.

Snares­brook station opened in 1856 on the Loughton branch of the Eastern Counties Railway.

The Merchant Seamen’s Orphan Asylum was built in 1862 and later served as a convent and then a hospital.

The New Wanstead estate was laid out south of the station and the remainder of the area filled out during the rest of the century, culmi­nating with the Drive estate, which was begun in 1896.

The railway line was elec­tri­fied in 1947, when it became part of the Central line.

A conser­va­tion area stretches all the way along Hollybush Hill and Woodford Road into South Woodford.

Snares­brook has rela­tively few young families. Pensioner house­holds outnumber those with dependent children, a reversal of the national norm.

The picture of the Eagle on this page is adapted from an original photograph, copyright Ewan Munro, at Flickr, made available under the Attribution-ShareAlike 2.0 Generic Licence. Any subsequent reuse is freely permitted under the terms of that licence.