For many years Bateman’s Buildings consti­tuted little more than a rather dodgy connec­tion between Soho Square and Bateman Street. The alley occupies the former site of Monmouth House, the home of the Duke of Monmouth and then of Lord Bateman, which was demol­ished in 1773.

The poet Percival Stockdale (who wrote an Elegy on the Death of Dr Johnson’s Favourite Cat) resided at 2 Bateman’s Buildings in his later years, the engraver John Raphael Smith lived at number 10 and the heroic epidemi­ol­o­gist John Snow lodged at number 11 in 1836–8.

“The wandering Londoner, whose peri­gri­na­tions take him into the foreign quarter, might pass a dozen times between Frith and Greek Streets without discov­ering its existence. Indeed, his search will not be rewarded until he pauses halfway down Bateman Street and turns up a narrow and exceed­ingly uninviting passage between a marine-store dealers and the shop of a small vendor of vegeta­bles and coals. He will then find himself at Bateman’s Buildings, a short, paved court, lined on each side by grimy, squalid-looking houses, the court itself forming the play­ground of a hundred or so spirited juveniles of the unwashed class.”

Most of the alley’s ‘grimy and squalid’ dwellings were replaced in the mid-20th century by some excep­tion­ally dull commer­cial premises. Bateman’s Buildings has been shifting upmarket recently and imag­i­na­tive archi­tects have trans­formed a small section by giving a group of apart­ments an 18th-century look, including mock shops on the ground floor. 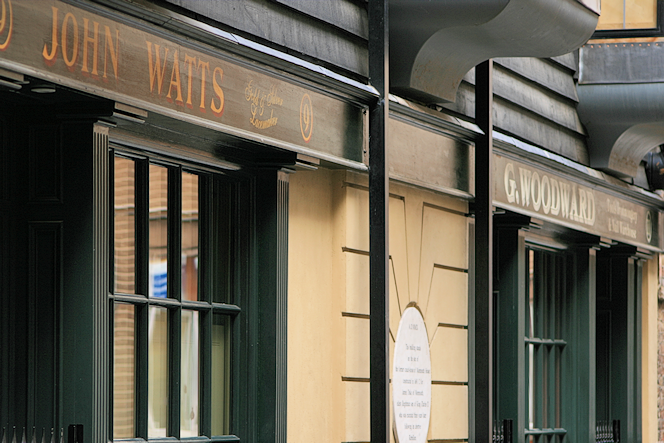