The Bridge House Estates – also known as the Bridge Estates Committee – was estab­lished to maintain the medieval London Bridge in 1282. Its origins can be traced back even further: to 1097, when William Rufus raised a tax to fund repairs to one of the bridge’s wooden predecessors.

The insti­tu­tion is named after its first head­quar­ters, Bridge House, which lay on the south side of London Bridge, in Southwark. Nowadays it derives its revenue from a property portfolio and is respon­sible for all five City bridges. Its consid­er­able surplus income is distrib­uted via a char­i­table grant-making arm, the City Bridge Trust, to a wide range of projects bene­fiting the inhab­i­tants of Greater London.

The Bridge Mark or Bridge House Mark is a graphic device iden­ti­fying the Bridge House Estates and the bridges for which that body is respon­sible. It was probably designed by the surveyor William Leybourn (1626–1716).

The mark is said to be emblem­atic of the martyrdom of St George, and Leybourn may have adapted his design from one that orig­i­nated in Southwark’s parish of St George the Martyr. Also known as the Southwark Cross,† the mark was employed by the former East Surrey Regiment and was incor­po­rated into the arms of the Metro­pol­itan Borough of Southwark in 1902 – appar­ently to the annoyance of the Corpo­ra­tion of London. The mark does not appear in the arms of the borough’s expanded successor, the London Borough of Southwark.

As shown in the image above, the Bridge Mark consists of a circle over a saltire, or letter X, with the lower points of the X joined to form a base and the circle surmounted by a cross pattée. Over the centuries, slightly differing versions of the mark have appeared, with or without serifs capping the ascenders of the saltire, and with the cross pattée taking various forms.

Each of the City of London bridges has one or more Bridge Marks engraved somewhere upon it or embossed on a plaque, as do prop­er­ties owned by the Bridge House Estates. The mark also appears on flags flying at Tower Bridge.

The photo­graph below shows the Bridge Mark in the middle of London Bridge. 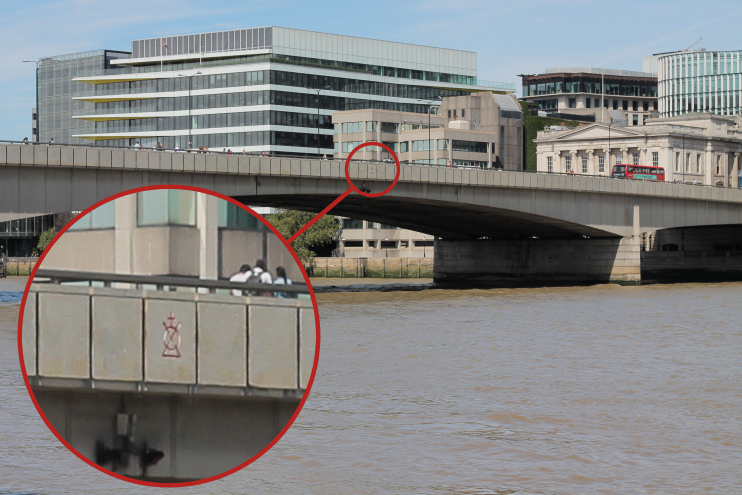 † In heraldic terminology, the Southwark Cross is described as an Annulet ensigned with a Cross pateé and interlaced with a Saltire conjoined in base.