South London’s most ancient town, situated directly across the Thames from the City of London 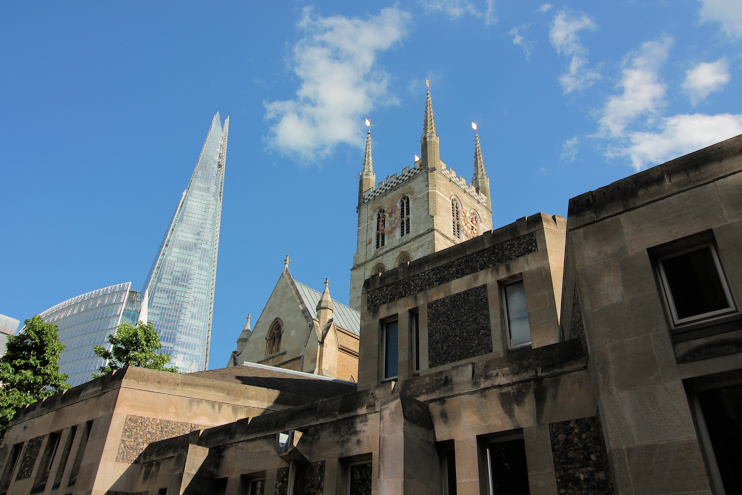 Southwark’s Old English name of Sudwerca means ‘southern defensive work or fort’. Southwark can lay claim to the longest history of any part of London, since it was here that the Romans chose to build the first bridge across the Thames following the invasion of AD43.

The settle­ment was an integral part of Roman Londinium, with public, indus­trial and domestic buildings on islands and reclaimed marshland. Its fortunes were always tied to those of the City on the opposite bank as it benefited from the flow of trade and transport across the river and also acted as a place of refuge and retreat.

A church was built on the site of the present-day Southwark Cathedral in around 607 and dedicated to Mary Overie, a local saint whose father was as a Thames ferryman. It came under the juris­dic­tion of the bishops of Winchester, who built their palace on a site to the west.

The church was rebuilt in the twelfth century and again in 1207 following a fire. Its resident Augus­tinian friary was dissolved in 1540 and it was reded­i­cated to St Saviour, the nave being rebuilt in the late Victorian era after a period of decline and disrepair. Famous members of the congre­ga­tion include John Harvard, founder of Harvard Univer­sity, who was born in Southwark in 1607.

The bishops’ palace was destroyed by fire in 1814 and today little remains except for its rose window, although its prison – the Clink – lives on as a street name and a universal term.

The first Southwark Bridge was privately built in 1815, and subse­quently bought by the Corpo­ra­tion of London using rent money from the tenants of London Bridge. The present bridge was completed in 1921.

Southwark’s marshy terrain constrained its expansion for centuries but as river commerce grew it became a trading and indus­trial centre, focused on the area known as the Borough.

The London Borough of Southwark was formed in 1965 from the metro­pol­itan boroughs of Bermondsey, Camber­well and Southwark. The borough stretches five miles (8 km) to the south in a roughly trian­gular shape to the site of the Crystal Palace and has some of the most diverse town­scapes anywhere in London. These range from the very urban north with its mixture of new and old, resi­den­tial and indus­trial, commer­cial and recre­ational through areas of largely intact 19th-century suburban devel­op­ment to its leafy spacious south. Southwark’s coat of arms is almost a pictogram of the borough’s history, with allusions to the Canter­bury Tales, Shakespeare’s Hamlet, Edward Alleyn and the Surrey Docks.

Southwark delftware was a type of tin-glazed earthenware made in Southwark during the 17th and 18th centuries.