A densely developed – and developing – district, occupying a broad swathe of inner south-east London between Tower Bridge and the Old Kent Road 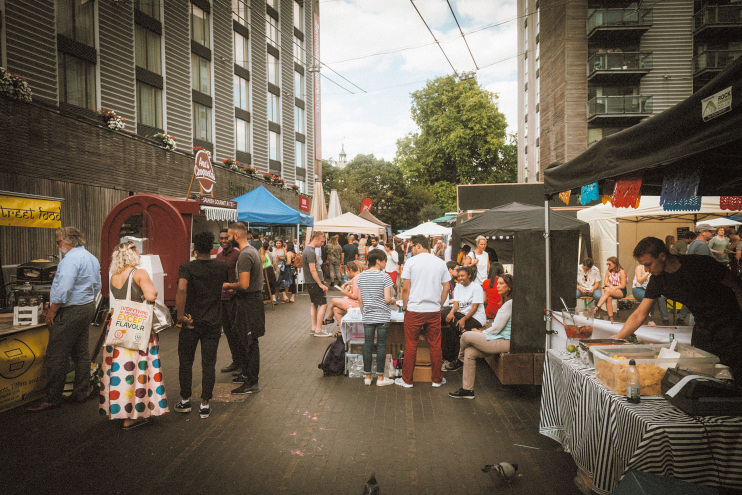 Bermondsey’s Old English name meant ‘Beornmund’s island’ and points to its genesis on habitable ground amid the marshes. Evidence has been found of Roman and Saxon occu­pa­tion. The dominant insti­tu­tion until the Refor­ma­tion was St Saviour’s Monastery – Bermondsey Abbey – which was founded for the Cluniac order by merchant Aylwin Child in 1089 on a site to the south of Tower Bridge. Nearby St Mary Magdalene’s was built as a parochial church in the 14th century and rebuilt in 1680.

Bermondsey’s plentiful supply of water and strong links with the City of London favoured the growth of its leather industry, with tannery pits dotting the area. Thomas Keyse’s discovery of a spa in 1770 created a fash­ion­able resort but its popu­larity was short-lived, the spa closing in 1804.

Another side to the area was starkly embodied by Jacob’s Island, a riverside slum depicted by Charles Dickens in Oliver Twist. The island lay east of St Saviours Dock and south of Bermondsey Wall, where the now-hidden River Neckinger enters the Thames.

Bermondsey’s growth was encour­aged by the opening of the capital’s first passenger railway, from Spa Road to Deptford, in 1836; it was soon extended from London Bridge to Greenwich.

The borough’s popu­la­tion grew rapidly from 27,465 in 1851 to 136,660 in 1891. Southwark Park Road developed into its main shopping street and Southwark Park its only signif­i­cant open space. The contin­uing impor­tance of the leather trade was illus­trated by the building of the Leather Market on Weston Street in 1833 and the ornate Leather, Hide and Wool Exchange on the corner of Leather­market Street in the late 1870s, when St Crispin’s Church was dedicated to the patron saint of leather and shoes.

The Bermondsey wharves brought food processing as an indus­trial spin-off, and Hartley’s Jams estab­lished a factory on Rothsay Street. The living condi­tions of the urban poor inspired the work of the phil­an­thropist and MP Alfred Salter, whose wife Ada became mayor of Bermondsey in 1922. She and her fellow coun­cil­lors were active in replacing slums with ‘modern’ tenements, planting trees and turning open spaces into play­grounds. The area suffered greatly in the Second World War and post-war rebuilding did not treat it kindly. Indus­tries such as leather died away but the Leather Market and the neigh­bouring Exchange were saved from demo­li­tion in 1993 and converted into workspaces.

The regen­er­a­tion of the ware­houses to the east of Tower Bridge at Shad Thames has brought the Design Museum and other attrac­tions. The fashion designer and Bermondsey resident Zandra Rhodes estab­lished the Fashion and Textile Museum at 83 Bermondsey Street. Dozens of bric-à-brac stalls operate at the Friday morning antiques market in Bermondsey Square. There are also warehouse-based antiques dealers in Bermondsey Street and Tower Bridge Road.

* The picture of the Mindful Drinking Festival 2017, Bermondsey Square, at the top of this page is slightly modified from an original photograph, copyright Voist Ltd, at Flickr, made available under the Attribution 2.0 Generic licence. Any subsequent reuse is freely permitted under the terms of that licence.