The redeveloped site of the former Surrey Docks, which (in theory but not in common parlance) includes Greenland Dock and Canada Water 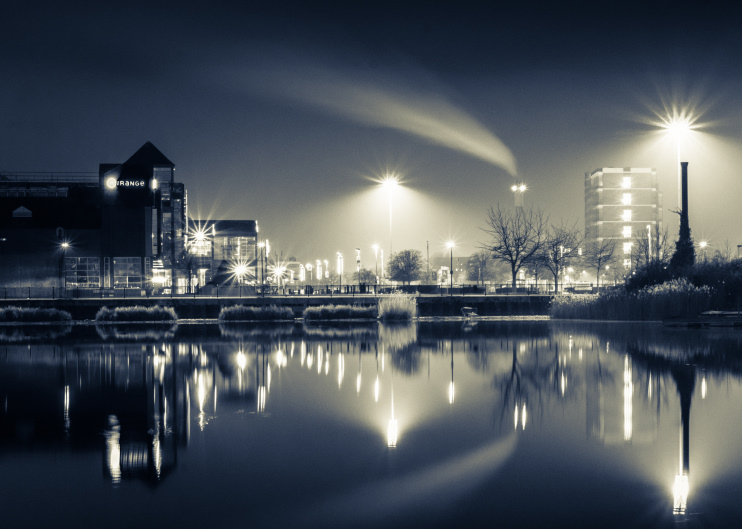 In 1695 Wrio­thesley Russell (later second Duke of Bedford) married Elizabeth Howland and the Russell family thus gained control of the poten­tially valuable Rother­hithe peninsula. He was 14 at the time and she was 11. Exca­va­tion of the Howland Great Wet Dock (later Greenland Dock) began the following year and work was completed by 1700.

In the 1790s theft and conges­tion caused chaos in the Pool of London, creating an intense demand for addi­tional inland facil­i­ties, and over the following century several rival companies filled 372 acres of the peninsula with a series of new docks. Ruinous compe­ti­tion between the companies prompted their merger in 1865 as the Surrey Commer­cial Docks Company. The East London Railway traversed the docks in 1869 and Deptford Road (later Surrey Docks) station opened in 1884. The Port of London Authority assumed control of the docks after its estab­lish­ment in 1908.

The Second World War brought the devas­ta­tion of the built envi­ron­ment and displace­ment of the local popu­la­tion. Many evacuees never returned and those that did were in desperate need of rehousing.

Bermondsey council built blocks of flats, while the PLA partially rebuilt the docks. However, with the decline of the whole of the London Docklands, the Surrey Docks were progres­sively shut down in the 1960s and closed completely in 1970.

The whole estate was acquired by the Greater London Council and some grandiose schemes were mooted, including a Channel Tunnel rail terminal, an Olympic park and a vertical take-off and landing (VTOL) airport. However, a recession in the commer­cial property market meant that most of the site was rede­vel­oped with mixed-tenure housing after the London Docklands Devel­op­ment Corpo­ra­tion took over in 1981.

Most of the docks were filled in, unlike those across the river. Shopping and leisure facil­i­ties filled most of the Canada Dock site. A small part of Lavender Dock became a pond and ecolog­ical study area for school­children. The renaming of Surrey Docks station as Surrey Quays in 1989 caused some resent­ment at the time but has since estab­lished the area’s rein­vented identity. Private house­building has continued into the 21st century, with devel­opers referring to projects in parts of Deptford as ‘near Surrey Quays’.

Almost a third of the residents of the Surrey Docks ward are in their twenties and there are rela­tively few children or old people. According to the 2011 census, two-thirds of the popu­la­tion is white – a high propor­tion by the borough’s standards, though down from four-fifths in 2001.

Local band Squeeze sang about the Surrey Docks on ‘It’s Not Cricket’, a track from the album Cool for Cats.

* The picture of Surrey Quays by night at the top of this page is cropped from an original photograph, copyright Barney Moss, at Flickr, made available under the Attribution 2.0 Generic licence. Any subsequent reuse is freely permitted under the terms of that licence.