A former Rotherhithe dock that became a regeneration zone 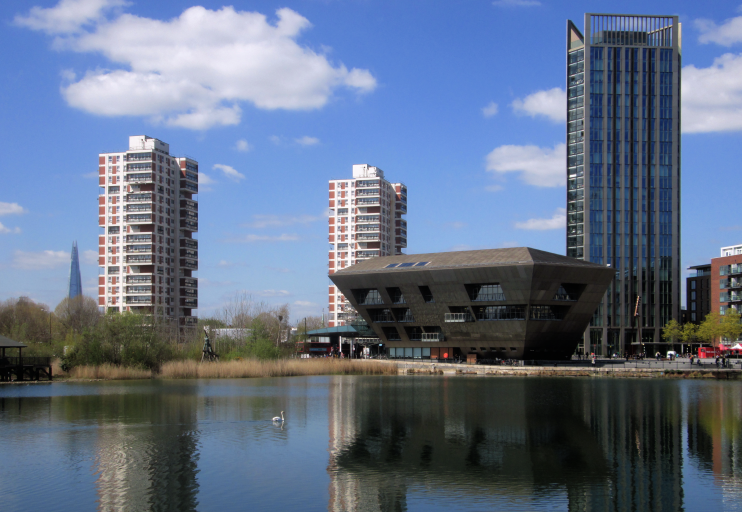 Canada Dock was constructed in 1876 on the site of two former timber ponds and was the first major scheme of the Surrey Commer­cial Docks Company, an amal­ga­ma­tion of former rivals. The dock took its name from its special­i­sa­tion in Anglo-Canadian trade.

The proximity of the East London Railway posed diffi­cul­ties for the builders, who used enormous amounts of concrete to ensure that the line would never be flooded. Huge new ware­houses were built alongside the new dock, each capable of holding 35,000 tons of grain.

In 1926 two neigh­bouring timber ponds were replaced by Quebec Dock, which was connected to Canada Dock.

East of Lower Road the Canada estate was built in 1962–4 on the site of a former chemical works. It consists of five ‘courts’ of 4‑storey blocks – named Calgary, Edmonton, Manitoba, Niagara and Scotia – and two 21-storey towers – Columbia Point and Regina Point – which are visible centre and left in the photo­graph above.*

In the early 1980s, following the progres­sive closure of the Surrey Docks and their rein­ven­tion as Surrey Quays, all of Quebec Dock and most of Canada Dock were filled in. Surrey Quays shopping centre covered the bulk of the Canada Dock site and the Mast leisure park replaced the dock’s southern goods yard with a nine-screen cinema, bingo, ten-pin bowling and several ‘formula’ restau­rants with an emphasis on American cuisine. The remaining northern portion of the dock was reduced in depth and reeds were planted to encourage waterfowl.

The Daily Mail Group’s Harmsworth Quays printing works was built on the site of Quebec Dock. Canada Water station opened in 1999, providing an inter­change between the East London line (now part of the London Over­ground network) and the newly-built Jubilee line extension.

Next came a major regen­er­a­tion project that has turned Canada Water into “a new town centre for Rother­hithe,” in a joint initia­tive by Southwark council and British Land. In addition to the usual mix of homes, commer­cial premises and a new public space, the scheme’s landmark feature is a library and culture space that opened in 2012 and is shown in the photo below. 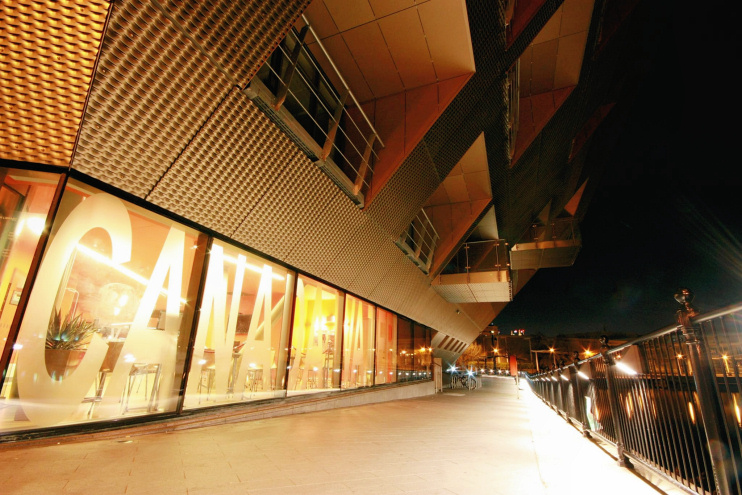 The Canada estate’s towers have recently been eclipsed by Barratt’s 26-storey Ontario Point – seen on the right in the photo­graph at the top – the only new building in the regen­er­a­tion zone with any real height.

Beyond the joys of the library and culture space, the reborn Canada Water is by no means perfect, though there are plans for much more to be done. In a highly favourable Observer review of the library’s archi­tec­ture, Rowan Moore said of the wider area’s rede­vel­op­ment: “The quality most obviously lacking, apart from charm or delight, is coherence. You go from car park to reed bed to tin shed to a wooden bridge redolent of old Holland, without apparent logic.”

Some very big numbers are involved in the next stage in the rede­vel­op­ment of Canada Water and neigh­bouring areas. A £4 billion master­plan allows for around 3,000 new homes, two million square feet of workspace for up to 20,000 jobs, and around one million square feet of shopping, leisure, enter­tain­ment, education and community space. It will also create 12 acres of open space, including a 3½-acre park, town square and 16 new streets, including what is claimed to be London’s first new high street in a century. Southwark council’s planning committee approved the master­plan in September 2019.