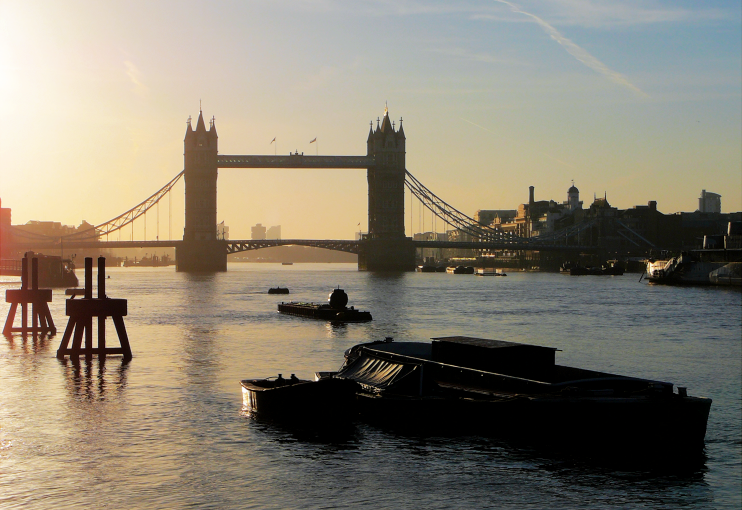 A pool (in this context) is a deep and still place in a river – and thus a good place to moor a boat. London’s pool is divided into upper and lower parts, which are respec­tively west and east of Tower Bridge.

Marked with a big pink pin on the map below (beyond the right edge on smaller screens), Cuckold’s Point is the eastern extremity of the Pool of London. It was named from the setting up here in 1562 of a pair of cuckold’s horns on a maypole (a cuckold was tradi­tion­ally repre­sented as having horns on his head). As well as being a gener­alised warning to husbands, this may have had some connec­tion with the Horn Fair at nearby Charlton, to which ferry-borne revellers could have come via the landing place at Cuckold’s Point Stairs (also known as Horn Stairs). Local legend says that King John granted an estate in the vicinity to a local miller whose wife he had seduced.

For centuries, cargo vessels traded at riverside wharves in and around the City of London. When these quays grew increas­ingly over­crowded many boats took to mooring in midstream and loading or unloading with the assis­tance of barges. The Pool was a perennial forest of bobbing masts. As early as 1586 William Camden boasted: “A man would say, that seeth the shipping there, that it is, as it were, a very wood of trees disbranched to make glades and let in light, so shaded it is with masts and sails.”

As Britain’s empire expanded and the indus­trial revo­lu­tion took hold, the Pool became the busiest section of river in the world, crammed not just with ocean-going ships bearing exotic produce from foreign lands, but boats full of immi­grants and emigrants, skiffs bringing oysters and fish from the Thames estuary or North Sea, and colliers trans­porting coal from Tyneside. 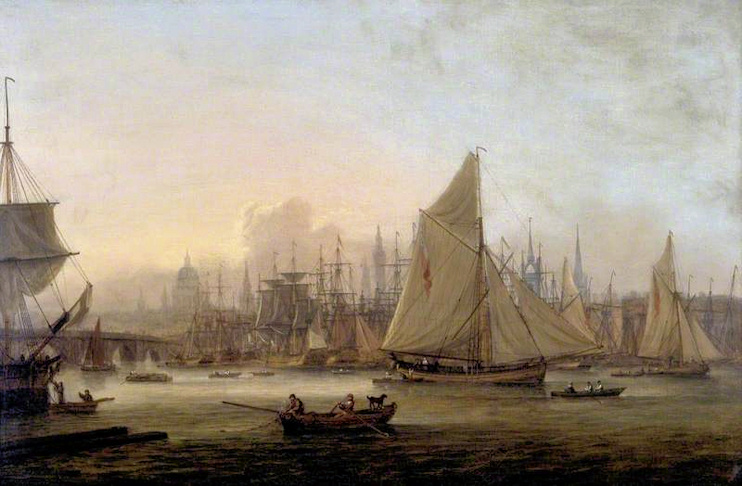 The first police force was formed at the end of the 18th century to prevent theft and fraud in the Pool of London. Around this time the river­banks began to fill with imposing ware­houses, several of which survive, notably at Butler’s Wharf and Hay’s Wharf on the south shore of the Upper Pool.

With the construc­tion of inland docks such as West India and East India, and later Royal Victoria and Royal Albert, the largest ships found new berths but the Pool remained a hive of activity until the ineluctable decline of London as a port in the mid-20th century. There­after, the limited traffic that remained on the Thames merely passed through the Pool rather than mooring here, though HMS Belfast took up a permanent riverside position as a museum ship in 1971.

Late in the last century the London Devel­op­ment Agency and other bodies attempted to make the Pool of London the focus of a regen­er­a­tion and tourism programme for the shoreline between London Bridge and just beyond Tower Bridge, embracing attrac­tions from Borough market (Southwark) in the west to St Katharine Docks (Tower Hamlets) in the east. However, public awareness of the Pool remained scanty and funding for the ten-​​year scheme ceased in 2007.

The Pool of London has been depicted in etchings by Whistler, sketches by Turner and paintings by Monet and André Derain, among many others.

The 1951 film Pool of London was a ‘drama of the river underworld’, directed by Basil Dearden.

Further reading: Peter Stone, The History of the Port of London: A Vast Emporium of Nations, Pen & Sword History, 2017
and Geoff Lunn, Port of London Through Time, Amberley, 2011