A Docklands Light Railway station and its immediate vicinity, located in the north-western corner of the Isle of Dogs and named after the docks that occupied the site for most of the previous two centuries 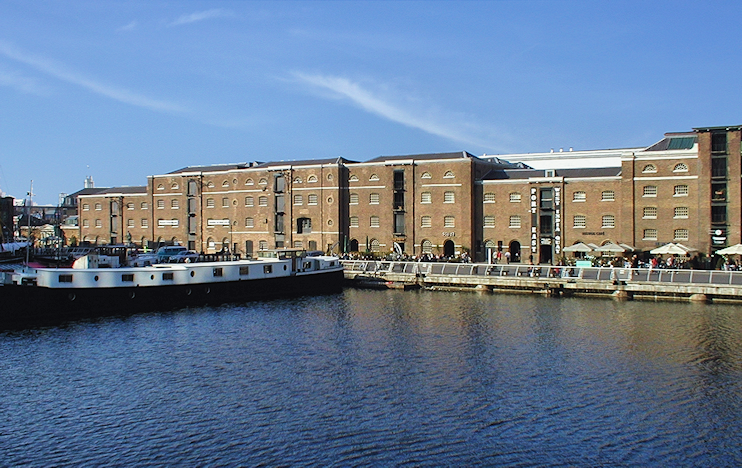 During the course of the 18th century the number of vessels discharging their cargoes at London’s riverside docks almost trebled and with this growth came over­crowding and increased pilferage. Liverpool had shown that wet docks provided a solution and a group of merchants, together with the West India Company and the Corpo­ra­tion of London, chose the Isle of Dogs as their preferred site as other investors already had plans for Wapping and the peninsula’s distance from London was perceived to provide added security from theft.

The West India Docks opened in 1802, divided into separate import and export docks – setting a precedent in dock construc­tion. South of the export dock the City Canal traversed the Isle of Dogs. The canal proved a commer­cial failure and was subse­quently enlarged to become the South Dock. Sugar, rum, teak, mahogany and coffee made up the docks’ principal imports. The following century saw alter­nating phases of enlarge­ment, increased compe­ti­tion, financial diffi­culty and mergers with other London docks.

Perhaps the most signif­i­cant event, with hindsight, was the company’s decision in 1881 to build a new dock at Tilbury, rather than further enlarging the West India Docks. Addi­tional expansion did even­tu­ally come, espe­cially after the creation of the Port of London Authority in 1908, but the docks’ long-term fate had by then been sealed. Most of the West India Docks were wrecked during the Second World War, after which the facility slowly declined until its closure in 1980.

The quays have since been rede­vel­oped Manhattan-style as Canary Wharf, Heron Quays and South Quay. The surviving ware­houses of the North Quay have been rebranded ‘West India Quay’, and provide amenities for local workers and residents, with bars and restau­rants, a multiplex cinema and the oblig­a­tory health club. West India Quay also has new apartment blocks and the Museum of London Docklands, based in the former No. 1 Warehouse.