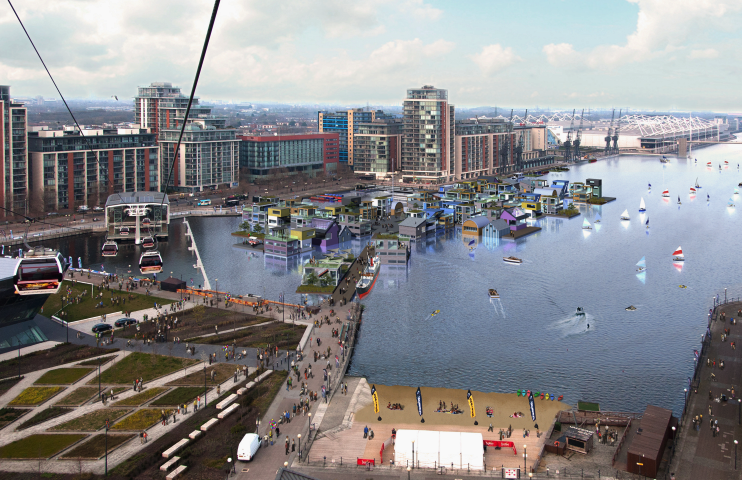 The Victoria Dock was promoted by railway contrac­tors and constructed on a flood plain that was purchased for little more than its agri­cul­tural value. Opened in 1855, the dock could take the largest steamships and had the latest hydraulic engines to open its gates. It was taken over in 1864 by the London and St Katharine’s Dock Company, which needed larger facil­i­ties and it became the Royal Victoria Dock when the company added the Royal Albert Dock in 1880. The accom­pa­nying rail sidings of the Royal Victoria Exchange were the largest of their kind in the country.

The dock handled frozen meats, fruit, butter and tobacco, as well as general goods. Ships were initially unloaded at jetties but a system of ‘simple lineal quayage’ later proved more suitable for the increas­ingly large vessels. The dock continued to adapt to changing circum­stances and in the 1930s and early 1940s grain silos were erected at Pontoon Dock and a new north quay was built. At the same time, the western entrance was closed, allowing the construc­tion of Silver­town Way. Very long transit sheds were rented by shipping lines special­ising in trade with specific countries, such as Argentina, Canada, the USA, Australia and New Zealand.

The Royal Victoria Dock closed in the early 1980s and most of its buildings were soon demol­ished. Surviving ware­houses have been converted to flats. The ExCel exhi­bi­tion and confer­ence centre dominates the much of the north quay, while chain hotels have been built to its east.

Shown in the photo­graph on the right, a high-level pedes­trian bridge was constructed across the dock in 1999 to provide access to the DLR stations for residents of the new housing devel­op­ments of West Silver­town.

Since June 2012 a cable car system has linked the Greenwich Peninsula (and the O2 Arena) with the Royal Docks (and the ExCel). In a ten-year spon­sor­ship deal worth £36 million, the service is branded the Emirates Air Line – but it has been unglam­ourously nicknamed ‘the dangleway’. The cars have the capacity to carry up to 2,500 passen­gers per hour in each direction across the river but have failed to achieve anything close to that usage except on special occasions.

Directly to the east of the cable car terminus, 15 acres of the dock may become a water­borne community with floating homes, restau­rants, cafes and bars, shown in the devel­opers’ CGI image at the top of the page. As well as 50 resi­dences for the lucky few, there would be a multi-purpose events space, a ‘blue water square’, a market square and what is being called a ‘floating corniche’. The proposed scheme takes its inspi­ra­tion – and some tech­no­log­ical know-how – from the floating homes at IJburg in Amsterdam.