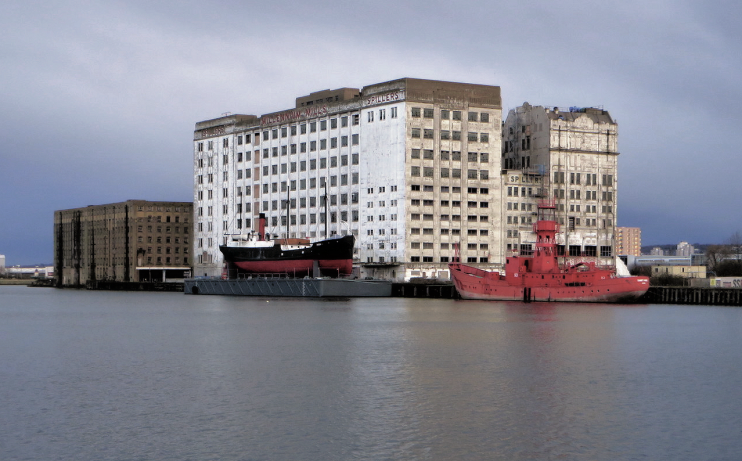 This was the site of a repair facility orig­i­nally called the Victoria Graving Dock, built in the late 1850s on the south side of the Royal Victoria Dock, as it was later called.

Using an inno­v­a­tive system of hydraulic jacks, vessels were raised out of the water on pontoons, which were then drained of their ballast water and shunted into a finger dock for repair or overhaul. There were four of these splayed fingers at each end of the dock but most have now been filled with concrete.

By the end of the 19th century ships had become too big for the equipment to lift and the dock switched to handling grain imports. Massive silos were built on the quayside, into which grain was pumped by suction. Several of the granaries and flour mills were damaged in the Silver­town explosion of 1917 and replaced in the years before the Second World War, notably by Spiller’s Millen­nium Mills (shown in the photo­graph above*) and the CWS Mill.

Most of the dockside buildings were demol­ished in the early 1990s during prepa­ra­tion for the creation of Silver­town Quays, an ambitious commer­cial and resi­den­tial project that has repeat­edly failed to mate­ri­alise. Just to the south, Pontoon Dock DLR station opened in December 2005.

Given its protected status, the ‘D’ Silo will of course be retained, whatever happens to the rest of the site. The Millen­nium Mills will also survive. For more on the Silver­town Quays project, which seems to finally be getting somewhere (as of June 2020), please see the West Silver­town page.

* The picture of Millennium Mills at the top of this page is adapted from an original photograph, copyright Philip Jeffrey, at Geograph Britain and Ireland, made available under the Attribution-ShareAlike 2.0 Generic Licence. Any subsequent reuse is hereby freely permitted under the terms of that licence.