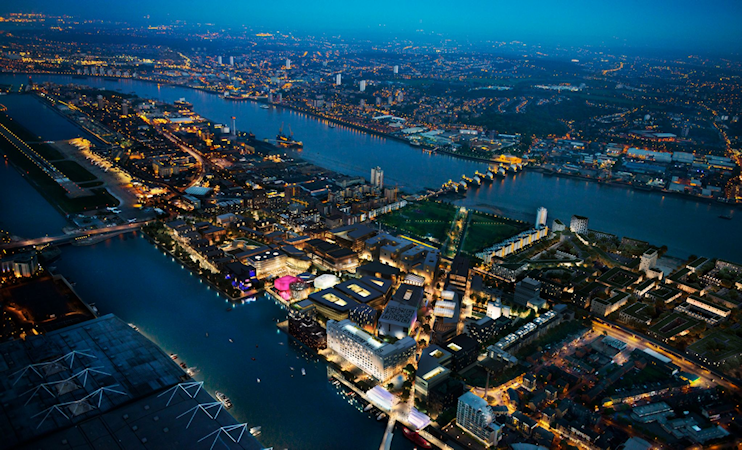 From the mid-19th century until the early 1980s riverside factories and quayside ware­housing occupied the former marshes here. Since the closure of most of the indus­trial premises this side of Silver­town has been under­going (or expecting to undergo) extensive regeneration.

Laughable as this may now seem given the value of the real estate, whole chunks of Docklands were set aside in the late 20th century for the construc­tion of homes for people of average or below average means. Here in West Silver­town the LDDC* sponsored the creation of Britannia Village, a ‘self-supporting community’ with housing of modest archi­tec­tural standards. Britannia Village primary school opened in 1999 on a site facing the village green.

Thames Barrier Park was completed in 2000 and boasts one of the most distinc­tive public gardens created in London in recent decades. The park is flanked by apartment blocks built by Barratt at the same time: Barrier Point and Tradewinds. West Silver­town station opened in 2005.

In the vicinity of Pontoon Dock, 62 acres of derelict land is (perhaps) to be regen­er­ated as “London’s new creative capital”, as shown in the CGI visu­al­i­sa­tion above. Unable to find inspi­ra­tion in London, the devel­opers turned to New York for ideas – and propose to create a Docklands version of Manhat­tan’s Meat­packing District (not during its coun­ter­cul­tural phase but its more recent upscale trans­for­ma­tion). In addition to up to 3,000 homes, there will of course be a new public space, restau­rants and other leisure facil­i­ties – and there may be a retail zone that consists of so-called ‘brand pavilions’ that are more inter­ac­tive exhi­bi­tions than shops. The proposals also include a new bridge across the Royal Victoria Dock to connect The Silver­town (as they want to call it) with the Elizabeth line (Crossrail) station at Custom House.

In 2018 the Silver­town Part­ner­ship, consisting of Starwood Capital and LendLease Group, bought out the rights from the consor­tium that developed this plan. In June 2020 £105m of loan funding from the government’s Home Building Fund was allocated to the part­ner­ship for invest­ment that should accel­erate the construc­tion of the new homes at Silver­town Quays. The funding will tackle high up-front infra­struc­ture costs, restoring Millen­nium Mills and dock walls, which had previ­ously been a barrier to progress with the scheme.

Meanwhile, plans are much more advanced in the area between Lyle Park and Thames Barrier Park, where an urban village called Royal Wharf – which has also been described as a whole new town – is under development.

* The London Docklands Development Corporation, a body that was frequently accused of rapacity but is beginning to look relatively benign with hindsight.