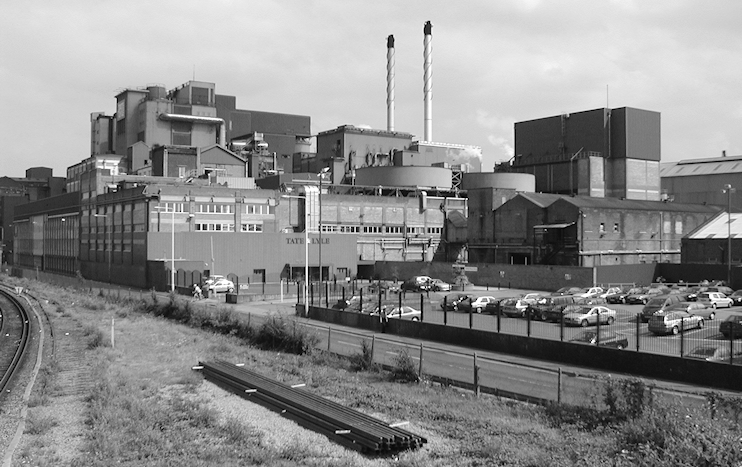 Industry and accom­pa­nying housing grew up on the marshes here after the cutting of the railway to North Woolwich in 1847, prompting the opening of Silvertown’s own station in 1863. The town takes its name from one of the first manu­fac­turers, SW Silver’s rubber works.

In 1889 a strike at Silver’s factory paralysed Silver­town for three months and influ­enced the evolution of trade unionism in London. John Tully’s book on the subject is subtitled “The lost story of a strike that shook London and helped launch the modern labour movement.”

London’s largest ever explosion occurred in 1917 at the Brunner Mond munitions factory. Seventy-three people were killed and much of the town was destroyed, only to be rebuilt after the war along the same lines as before.

During the Second World War Silver­town was a prime target for German bombing. On one occasion a ring of fire forced the Woolwich ferries to mount a Dunkirk-style evac­u­a­tion of the inhab­i­tants. The effect of wartime bombing in Silver­town is shown in Graham Sutherland’s painting Devas­ta­tion, 1941: An East End Street (1941, Tate Collection).

Silver­town station closed in 2006, though stations on the DLR extension to Woolwich have ensured that the district remains well served by rail. Recent resi­den­tial devel­op­ments have primarily focused on West Silver­town. The regen­er­a­tion of the dockside area known as Silver­town Quays – north of Pontoon Dock station – may begin rela­tively soon, after several previ­ously proposed schemes had failed to get off the drawing board.

Mark Knopfler’s song Silvertown Blues contrasts scenes of desolation in turn-of-the-millennium Silvertown with the economic boom taking place elsewhere in Docklands: on the Greenwich peninsula, in Blackwall and at London City Airport.