One of the last remaining parts of London’s docklands not to have been wholly regenerated – but this will change, eventually 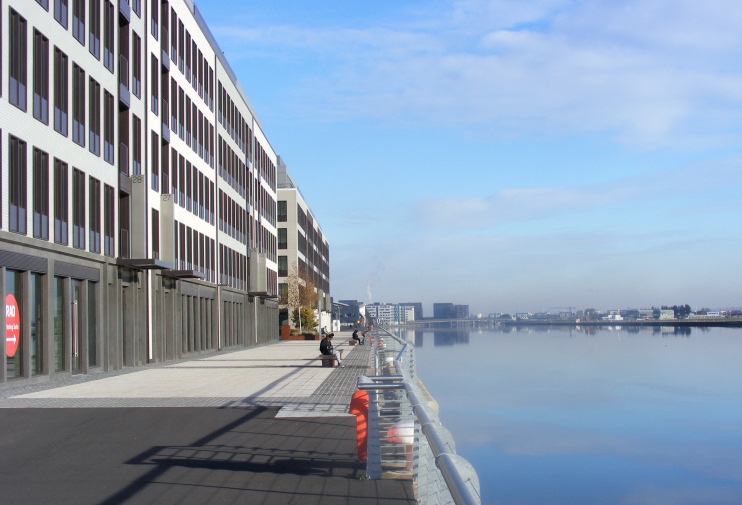 In response to the ever-increasing size of ships, which had become too big even for the neigh­bouring Victoria Dock, construc­tion work began on the Albert Dock in 1875 and it was opened in 1880 by the Duke of Connaught on behalf of Queen Victoria. The quayside was lined with single-storey transit sheds rather than old-style ware­houses and this was the first dock in London to be lit by elec­tricity. As trade evolved, the dock began to specialise in chilled meats, bananas and tobacco. The Lower Gallions entrance was constructed in 1886 to compete with the threat posed by new docks being built by the East and West India Docks Company at Tilbury.

The Royal Albert Dock seamen’s hospital was estab­lished in 1890 as a branch of the Dread­nought seamen’s hospital, Greenwich. The London School of Tropical Medicine was founded at the hospital in 1899 and remained there until its relo­ca­tion to Blooms­bury in 1920.

The Royal Albert Dock was damaged in the Second World War and did not fully reopen until 1956. With its closure in the early 1980s, almost all the buildings were demolished.

London City Airport was laid out on the south quay, office blocks replaced the former cold stores at the north-west corner and Univer­sity of East London premises have been built at Cyprus. The dock itself is now used for rowing and regattas.

Despite prolonged efforts by the London Devel­op­ment Agency and Newham council to find a suitable investor, a signif­i­cant stretch of the dockside south of Beckton Park station has long remained unre­gen­er­ated. In 2013 Boris Johnson announced details of a deal with Advanced Business Parks to transform this 35-acre site into a business district that would “forge new trade links with China and other economies in the Asia-Pacific region.”

A July 2022 article in the Guardian, written and photographed by Oliver Wain­wright, describes the absence of progress since then. Here is a key paragraph:

“Almost a decade since Johnson signed the deal with the Chinese developer ABP (Advanced Business Parks) to build his dockside fantasy, the area is a ghost town. About a tenth of the project has been realised: a row of pristine office blocks marooned in a sea of tarmac and overgrown scrubland, with no tenants in sight. Last week, after years of uncer­tainty and missed deadlines, the Greater London Authority finally kicked the developer off the project, citing lack of progress on the scheme, leaving the future of the 14 hectare (35 acre) site up in the air.”

* The picture of the Royal Albert Dock at the top of this page is slightly modified from an original photograph, copyright Sludge G, at Flickr, made available under the Attribution-ShareAlike 2.0 Generic Licence. Any subsequent reuse is freely permitted under the terms of that licence.