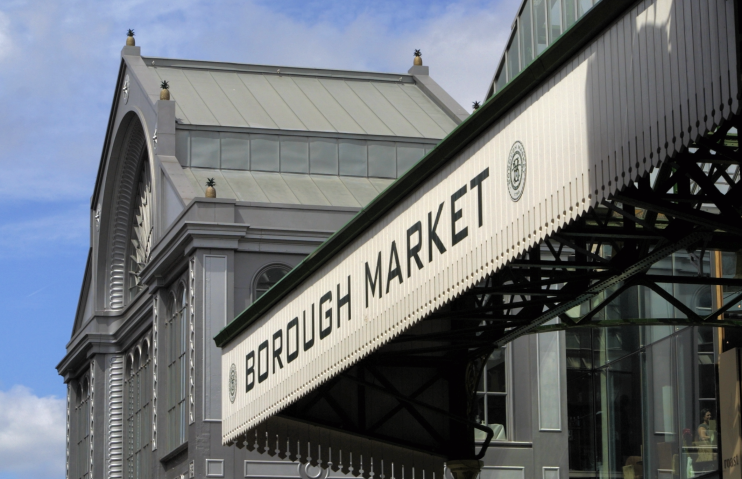 The Borough’s name recalls the presence of a defensive ‘burgh’ (a fortified settle­ment) protecting London Bridge. The church of St George the Martyr was built in the 12th century and Marshalsea gaol was in existence by 1381, when it was attacked during the Peasants’ Revolt.

The most illus­trious of the Borough’s many inns was the Tabard, from which the pilgrims of The Canter­bury Tales began their journey. Pilgrimage Street, Manciple Street and Pardoner Street all commem­o­rate Chaucer’s tale tellers. The White Hart Inn was the head­quar­ters of Jack Cade during his revolt of 1450 against Henry VI.

A 17th-century print shows a Civil War fort on Borough High Street guarding the southern approaches to London from Royalist attack but most of the Borough was burned down in 1676, in the so-called Little Fire of London.

The Tabard was rebuilt as the Talbot after the fire – the change of name appar­ently being the result of a misun­der­standing by the signwriter.

The timbered and galleried George Inn was also rebuilt and – though there are still plenty of other pubs around here – this is the only survivor from the days when the inns thrived on their position serving the stage­coach route from London to the south coast, and when St Margaret’s Hill, now part of Borough High Street, formed a wealthy enclave amidst the surrounding poverty of Southwark. The George is a National Trust property, leased to Greene King.

St George’s church was stoutly rebuilt in the mid-1730s. The Talbot was pulled down in 1875 despite protests and Marshalsea gaol met the same fate, to less dismay, in 1887. Borough station opened three years later.

Borough market is of medieval origin and has traded at its present location for 260 years. The buildings date from the mid-19th century – including the Floral Hall portico (visible in the photo­graph at the top of the page), though this orig­i­nally stood in Covent Garden, but was disman­tled when the Royal Opera House site was rede­vel­oped in 1999 and relocated here five years later.

In response to declining business at the end of the 20th century, the wholesale market expanded (very success­fully) into retail, with accom­pa­nying pubs and restau­rants, focusing on the ‘foodie’ consumer, with an emphasis on organic and speciality farmers’ produce.

Borough market was the scene of an Islamist terror attack on 3 June 2017. The three asinine assailants were all shot dead by police.

Charles Dickens’ father was imprisoned in the Marshalsea and the author made it the birthplace of Little Dorrit.