A hitherto unfashionable locality situated south of Thamesmead, now boosted by the arrival of the Elizabeth line (Crossrail) 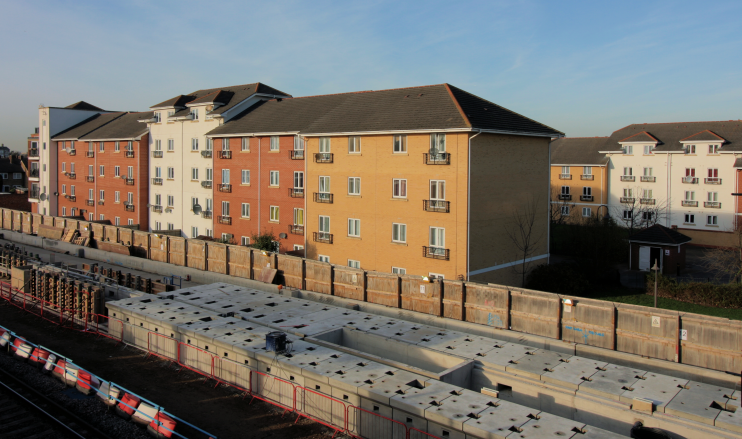 Abbey Wood is named after the ancient woodlands that surround the remains of Lesnes Abbey, founded in 1178. The abbey’s site was close to a marsh that was prone to frequent flooding when the Thames over­flowed its banks. The monks had to maintain the river wall to prevent the floods, which allowed the devel­op­ment of a small settle­ment here. The hamlet had only a hundred inhab­i­tants when the North Kent Railway arrived and a small station opened in 1850, and its setting remained rural for the rest of that century.

To the south, the Royal Arsenal Co-operative Society began building the Bostall estate from about 1900. Further expansion came with the construc­tion of a tram depot, which was subse­quently converted to a bus garage.

In the 1950s land sales by the shrinking Woolwich Arsenal allowed the council to build the Abbey Wood estate on land west of Harrow Manor Way. For a while the estate was a boom town, with industry and more housing piling in.

Local amenities followed, but only after pressure from community activists. More than half the house­holds are now owner-occupied and Abbey Wood has histor­i­cally consti­tuted a useful first step on the ladder for cash-strapped home buyers, espe­cially those with children. However, house prices have increased in antic­i­pa­tion of the arrival of the Elizabeth line, which even­tu­ally opened in May 2022.

In 2012 Devel­op­ment Secu­ri­ties PLC announced plans for an £85 million project called the Cross Quarter scheme, trans­forming a 10-acre derelict indus­trial site adjacent to Harrow Manor Way and Felixs­towe Road. Among other elements the scheme has resulted in the construc­tion of a Sainsbury’s super­market with flats above.

In 2013 the London Borough of Bexley secured monies from the Heritage Lottery Fund that has been used to make Lesnes Abbey Woods more acces­sible and appealing to residents and visitors.

, Greenwich Guidebooks, 1996
Blog post: From the Murky Depths on the Cross Quarter scheme