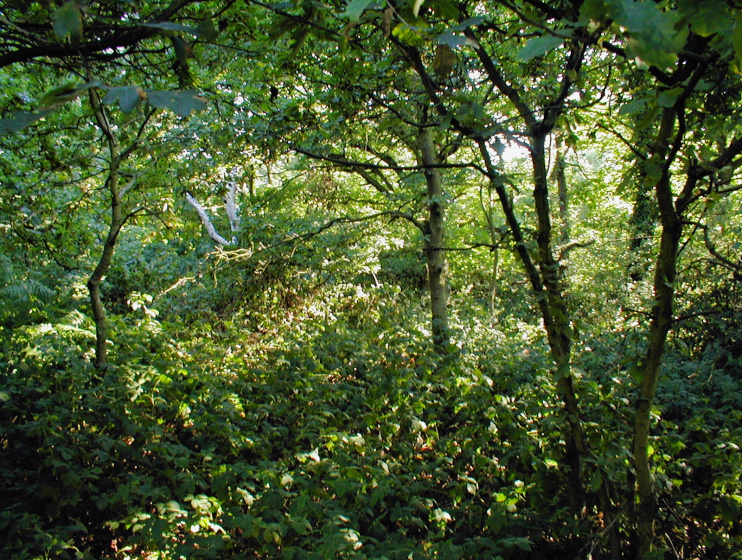 The developed part of this locality is often known simply as Bostall, a name that probably derives from Old English words meaning ‘a secure place’, as it provided refuge from the regular flooding of the lower-lying land nearer the Thames.

The commoners resisted attempts by Queen’s College, Oxford, to enclose and develop the heath in the 1880s. The college had appointed a local solicitor and builder, whose homes were trashed during riotous scenes, and the author­i­ties drafted in 200 extra police and called out the fire brigade to hose down the mob. The battle was resolved in court, when Queen’s College lost the case – and then lost interest in the land, after which the Metro­pol­itan Board of Works acquired and preserved 155 acres.

East of Knee Hill the large gardens of some Victorian prop­er­ties have become part of the woodland again, including an orna­mental pond.

The Royal Arsenal Co-operative Society built housing to the north-west from the end of the 19th century, digging a chalk mine to provide material for road foun­da­tions and plas­ter­work in the houses.

The land to the south-east of the preserved heath and woodland was developed in the 1930s. The council restrained the more impatient aspi­ra­tions of spec­u­la­tive builders but construc­tion never­the­less exceeded 500 homes a year for most of the decade, mostly large three-bedroom semi-detached houses. Cabbage fields between Abbott’s Walk and King Harolds Way were covered with the distinc­tive bungalows of the St Hilary estate.

To the south, the orchards of Dixons Farm were built over, although some fruit trees survived in back gardens. Shops, schools and in some cases roads did not come until after the first residents had moved in.

Bostall suffered some serious bomb damage during the Second World War owing to its proximity to targets in Erith. A single parachute mine damaged more than a thousand prop­er­ties in 1941.

After hostil­i­ties ended the remaining empty corners of the district were temporarily used for prefab­ri­cated accom­mo­da­tion before their replace­ment by more semi-detacheds. St Andrew’s church began as a wooden structure in 1935 and was replaced by a permanent building on the same site in 1957. Methodist and Roman Catholic churches were also built in the 1950s. In 1984 St Andrew’s became the mother church of the newly created parish of Bostall Heath.

A large Victorian house on Bostall Hill called Shornells, which the Co-operative Society had used as a training centre, was replaced in 1994 by what is now called the Greenwich and Bexley community hospice. A second phase of the hospice’s devel­op­ment was completed in 2003.

Co-operative Woods has one of London’s best camping and cara­van­ning sites, located off Feder­a­tion Road and open all year round. It is nowadays called the Abbey Wood caravan club site. A corner of Co-operative Woods is shown in the photo at the top – though admit­tedly it could be almost any piece of woodland anywhere.