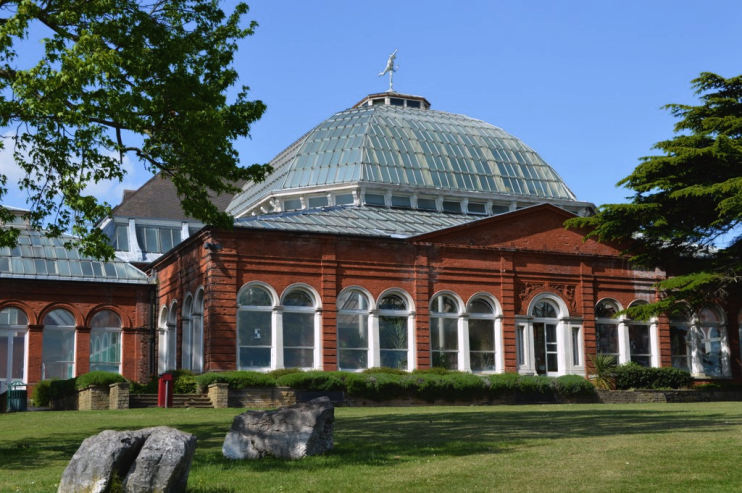 It is possible that this place’s name refers to an aviary that may have existed here in the early 19th century. A map of 1805 calls the area Pollcat End.

John Thomas North was nicknamed ‘the nitrate king’ for the wealth he accu­mu­lated dealing in sodium nitrate from Chile and he devoted a large part of his fortune to building Avery Hill House in 1891. He dismissed the architect for going 50 per cent over budget in creating what was virtually a small palace. North died only five years after the house was built and the London County Council then acquired the building and its 86 acres of grounds, which in 1903 were opened to the public as Avery Hill Park.

In 1906 Avery Hill House became the nucleus of Avery Hill College of Education, which was enlarged soon after­wards with the purchase of two nearby properties.

The Crown sold 68 acres of neigh­bouring farmland for devel­op­ment in 1936. Several builders collab­o­rated in laying out a set of streets, which were named after the fields and woods that they replaced. After the war the LCC took over and completed the estate, building a school and blocks of flats, to the annoyance of some early residents. The GLC added a final phase, which included a nursery and retire­ment flats, before handing the estate over to the London Borough of Greenwich in 1980.

Avery Hill College merged with Thames Poly­technic in 1985 and is now part of the Univer­sity of Greenwich. The campus is situated in on either side of Avery Hill Park. The library, once the great hall of North’s mansion, is a listed building, as is the adjacent glass-domed winter garden, which is open daily from 10am to 12 noon and 1pm to 4pm. Admission is free.

Student social facil­i­ties are centred on the recently opened second phase of the student village – a courtyard devel­op­ment of flats for 1,300 occupants. The village includes the Dome, a purpose-built venue with capacity for 1,000.

* The picture of Avery Hill Park hothouse at the top of this page is slightly modified from an original photograph, copyright Matt Brown, at Flickr, made available under the Attribution 2.0 Generic licence. Any subsequent reuse is freely permitted under the terms of that licence.