A historic religious and theatrical site located at the eastern end of Victoria Embankment, now dominated by a railway terminus and gyratory traffic system 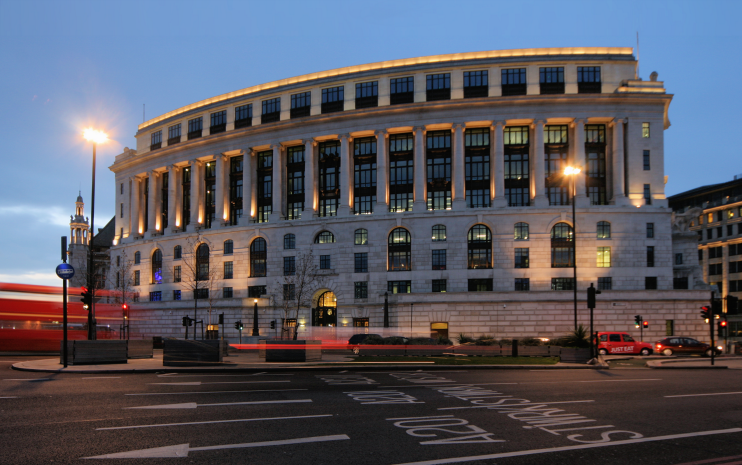 The Black Friars (or Domini­cans) were so called because they wore long black mantles over their white robes. In 1224 the friars estab­lished a priory on the east side of Shoe Lane and then moved across the River Fleet to what is now the east side of New Bridge Street in 1278. The Dominican order founded more than 50 priories but this was probably the most important and it was a venue for early parlia­men­tary conclaves.

The order in England was dissolved by Henry VIII in 1538. Unlike some other religious buildings, the priory did not survive to serve a different purpose. It had been reduced to a pile of rubble when the actor James Burbage acquired much of the site to build the Black­friars Theatre in 1596. William Shake­speare was involved in the enter­prise and in March 1613 he paid £140 for a property nearby, in what is now Ireland Yard. The building was the former priory gatehouse, to which he made improve­ments, according to a legal document of 1615. However, by that date he seems to have been spending much of his time back in Stratford, where he died the following year.

The Black­friars Theatre closed in the Civil War and was demol­ished in 1655. Playhouse Yard marks its site.

Black­friars Bridge was built in 1769, using funds generated from rents on the houses and shops of London Bridge. Struc­tural problems caused by water scouring neces­si­tated its replace­ment exactly a century later.

In 1864 the London, Chatham and Dover Railway Company opened Black­friars station on Ludgate Hill. The station moved to its present site by the river in 1886. Subse­quent exten­sions and alter­ations progres­sively compounded its status as the ugliest railway terminus in London until its reno­va­tion in 2009-12, which intro­duced mainline platforms that stretch the full width of the Thames, an imposing, glass-fronted ticket hall at the corner of Queen Victoria Street and New Bridge Street and an addi­tional entrance on the south side of the river.

Shwon in the photo­graph at the top of this article, Unilever House was built in 1930–2 on the site of DeKey­ser’s Royal Hotel (1874), which had been taken over by Lever Brothers in 1921. With the unifi­ca­tion of Unilever’s Dutch and UK arms in 2020, Unilever House became the company’s worldwide head office.

Across Queen Victoria Street from the station, the Black­friar (or Black Friar) is the finest Arts and Crafts pub in London. It began its existence in 1875 as a fairly ordinary estab­lish­ment, distin­guished only by its wedge shape, but was remod­elled in several stages during the early years of the 20th century by the architect Herbert Fuller-Clark and a group of artist-craftsmen, of whom the most signif­i­cant was the sculptor Henry Poole. There are delightful deco­ra­tive touches outside the pub but it’s the interior that truly astounds, with monkish motifs, mosaics and copper reliefs abounding amidst the mirrors and multi-coloured marble.

East of Black­friars station a bombed-out warehouse was converted into the Mermaid Theatre in the late 1950s but has primarily been used as a confer­ence and events venue in recent years.

South of the river, One Black­friars (detail shown above) is a 50-storey mixed-use devel­op­ment also known as the Vase. Its shape was appar­ently inspired by the (much more bulbous) Lansetti II vase created by Timo Sarpaneva, now in New York’s Metro­pol­itan Museum of Art, as well as by the sculp­tures of Constantin Brâncuși and Henry Moore. The site was formerly occupied by the head­quar­ters of Sains­bury’s, which relocated to Holborn Circus in 2000.

Early on 18 June 1982 the body of Italian financier Roberto Calvi was found hanged under Blackfriars Bridge, his pockets stuffed with bricks and stones. Calvi, dubbed ‘God’s banker’ because of his ties to the Vatican’s bank, IOR, had been seeking help for his failing Banco Ambrosiano after escaping house arrest in Rome. Italian prosecutors charged five individuals with Calvi’s murder in 2005. All were subsequently acquitted.