A little-used name for an industrial and commercial zone in Hayes, situated south of the Grand Union Canal 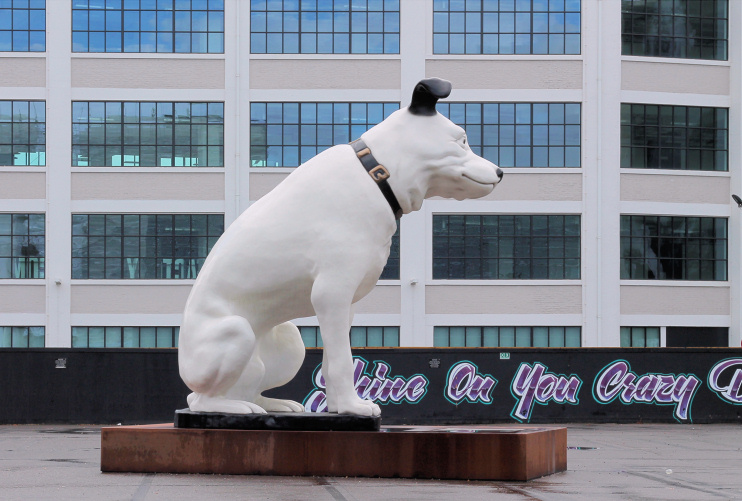 The statesman and writer Henry St John, Viscount Boling­broke acquired the 17th-century Dawley House in 1725 and substan­tially rebuilt it; Dryden, Pope, Swift and Voltaire were among his visitors here.

In 1755 Henry, Earl of Uxbridge, added the manor to his extensive land­hold­ings in the district and built a mile-long wall around Dawley House to keep out smallpox, or rather unwanted visitors who might have been carrying it. A section of the wall has survived to the present day and is locally listed. It now forms part of the boundary of Stockley Park.

Dawley House was demol­ished in 1776 and its once-beautiful gardens became brick­fields. The de Salis family acquired the estate and sold it off little by little over the following 160 years.

The Gramo­phone Company (later EMI) moved its head­quar­ters to Blyth Road in 1911 and opened a factory and recording studio here. It is said that the company bought all the chickens in the neigh­bour­hood to prevent their cackling being picked up by the recording apparatus.

Between the wars other manu­fac­turers colonised the whole area between the canal and the railway line. By the early 1960s, EMI owned 150 acres of land and employed 14,000 staff. The company progres­sively withdrew from Dawley, relo­cating its offices, closing the factory, spinning off its central research labo­ra­to­ries and selling the site to a Far Eastern fund in 1999.

A slow-moving regen­er­a­tion programme has finally picked up speed recently, having hitherto been constrained by the desig­na­tion of much of Dawley as a conser­va­tion area. In addition to a ‘unique media academy’ and several blocks of apart­ments, devel­op­ments have included the conver­sion of the former EMI factory to offices and the instal­la­tion of an 18-foot high statue of Nipper, the HMV dog.