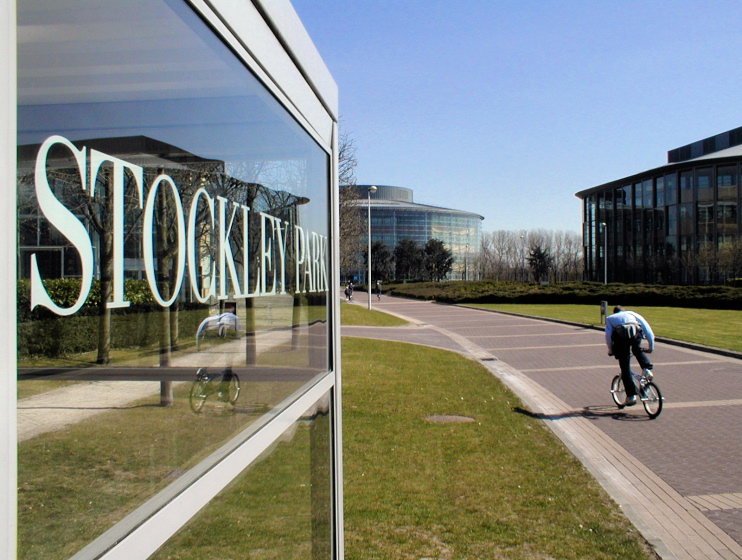 This used to be an area of disused sand, clay and gravel pits, inter­spersed with piggeries and nurseries. The 350-acre site was trans­formed in the late 1980s into a commer­cial science park, now regarded as the foremost devel­op­ment on the ‘West London Corridor’.

The park takes its name from Broad and Company’s Stockley brick works, which were estab­lished south of the Grand Union canal in the late 19th century. Stockley Farm, also south of the canal, was formerly called Starveall Farm – probably a humorous reference to the poor quality of the local soil. The ‘Stockley’ name is said to be a port­man­teau word, derived from ‘Cowley stock [bricks]’.

“Smothered in topsoil … and land­scaped to within an inch of its life,” as Diamond Geezer has put it, Stockley Park provided one of London’s largest public parks and open spaces to be created in the 20th century and is touted as an example of what can be achieved by public/​private part­ner­ships at no cost to the local community.

Archi­tec­tural critics were divided over Stockley Park’s aesthetics, and some industry commen­ta­tors have called it ‘grim’ and ‘dreary’ – hardly what its creators intended. The site changed hands several times after the project began. Never­the­less, the early occupiers’ list read like a who’s who of high-tech – although some have since pulled out.

The business area is set in a land­scaped country park, with an 18-hole public golf course. Plans for a rail link and a station, Heathrow North, to be based just outside Stockley Park have not come to fruition but the park’s tenants have had some success in reducing vehicle usage through cycle-to-work and car sharing schemes.

Following a spate of late-night car cruising in 2002 security barriers were erected to prevent use of the park as a through route, so the tree-lined boule­vards are almost empty of traffic – except for under-used buses and kids racing their bikes. And even at lunchtimes only a handful of workers take a stroll or make use of the green spaces.

To the north-west of the business zone and its parkland, Park Academy West London opened in 2017, replacing the consis­tently failing Stockley Academy.

Located off Bennets­field Road, the Arena service and leisure hub incor­po­rates an 80-bedroom hotel, opened in late 2018 in place of the White House, a Lloyd’s No.1 bar that was named after a former beerhouse that stood some distance away from here.

Stockley Park has been gaining a little fame recently (and potentially notoriety) as the home of the Premier League Match Centre, at IMG Studios, where English football’s video assistant refereeing technology and team are based.