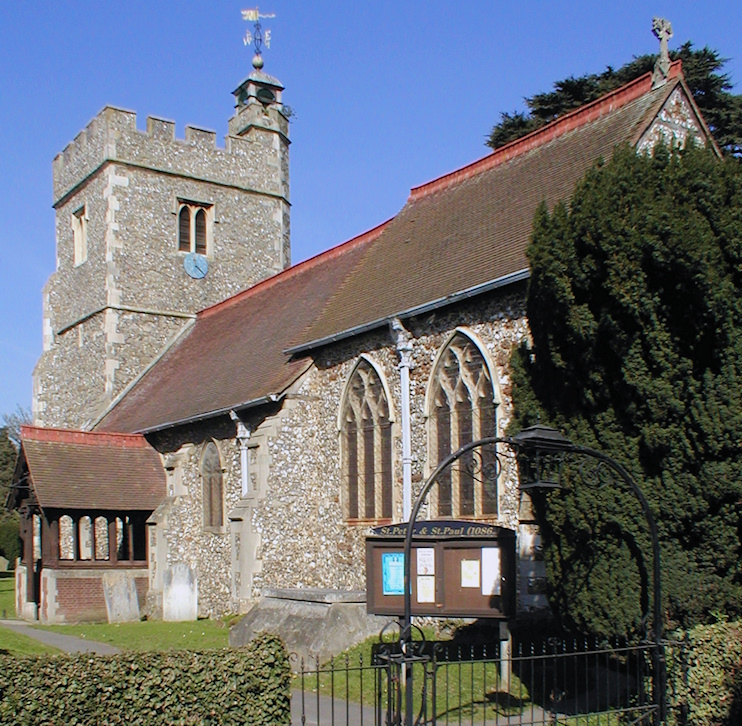 This was Hygered­ington in 831 and Hard­ington (or vari­a­tions upon it) for several centuries after that.

Shown in the photo above, the church of St Peter and St Paul was in existence by 1086, when the manor house stood nearby. The church’s Norman south door is said to be the best in outer London.

The centre of the village had shifted southward by the 17th century and a small settle­ment had grown up at the West End of Harlington by the 1750s.

To the north of the parish the Grand Junction (now Grand Union) Canal was constructed in the 1790s and the Great Western Railway was built through the district in the 1830s, although Hayes and Harlington station did not open until 1864. Cottages were built for brick-workers and new public houses joined the White Hart and the Red Lion.

The intensity of brick­making and gravel-working in the north was so great that much of the land was lowered by several feet.

The presence of the railway and the canal brought factories to the Dawley area, and these in turn brought housing, espe­cially semi-detached prop­er­ties north of Pinkwell Lane in the 1930s, and some later council flats. This evolution consumed the former village of Pinkwell and merged with Hayes to the north – indeed, many consider this section to be part of Hayes rather than Harlington. The part of the parish that lay south of the Bath Road (A4) was taken by the air ministry in 1945 for the creation of what became Heathrow airport.

The construc­tion of the M4 motorway in the 1960s divided the area into two quite distinct parts. The area north of the motorway is now entirely filled with housing, while the old centre to the south has been protected from overde­vel­op­ment, although much of the village had already lost its original character as a conse­quence of the proximity of Heathrow. Harlington village was made a conser­va­tion area in 2005.

At Harlington community school, on Pinkwell Lane, the roll is ethni­cally very diverse and has a very high propor­tion of pupils with English as an addi­tional language, but only a small propor­tion is at the early stages of language acquisition.

Queens Park Rangers FC trains at Imperial College’s Harlington sports ground on Sipson Lane – and appears likely to be staying here for the fore­see­able future, despite earlier plans to create a new training base at the Warren Farm sports centre, which is located between Hanwell and Southall.

Harlington Locomotive Society is a model engineering club that runs a miniature railway set in a small orchard. It’s usually open to the public on two Sundays each month from Easter until October.