A 40-acre open space in east Ealing, and the electoral ward that surrounds it 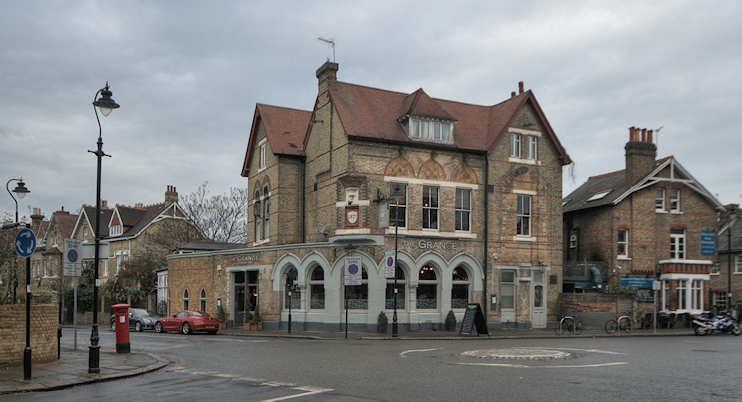 In the Middle Ages Ealing Common covered some 70 acres but its extent was reduced as a result of progres­sive encroach­ment. Medieval tracks have been upgraded to become the roads that now frame and traverse it.

From 1809 until his assas­si­na­tion in 1812, prime minister Spencer Perceval lived at Elm Grove House, at the south-west corner of the common. His son’s widow later sold the Elm Grove estate to the East India Company.

In the early 19th century the manorial rights to the common were trans­ferred from the bishops of London to the Eccle­si­as­tical Commis­sioners. At that time the scrub was mostly cleared, more trees were planted and the ponds in the south-east corner were drained.

Since that time, the common has served as a ground for pony rides, a meeting place for thousands of striking workers during the General Strike, wartime allot­ments and – to the present day – as a site for funfairs and circuses.

Shown in the photo above, the Grange public house was built in 1871 on the site of a former beer house called the Crick­eters – a name that indicates another use to which the common was put.

In 1878 the Metro­pol­itan Water Fountains Asso­ci­a­tion installed a drinking fountain beside the Uxbridge Road. The amenity is located near the common’s Hanger Lane bus stop.

Ealing Common station opened in 1879, when housing began to spread from the town in this direction. In 1880 Ealing local board (the council’s fore­runner) bought the manorial rights and assumed manage­ment of the common. St Matthew’s church and several substan­tial detached houses were soon built on North Common Road, but the open fields of Fordhook Farm survived to the east until the end of the century.

Building reached a peak in 1903, when some rela­tively new houses were demol­ished and replaced by blocks of flats.

Spencer Perceval’s youngest daughter bequeathed money for All Saints’ church to be built in his memory and Leopold de Roth­schild gave the site, where Elm Grove had formerly stood. The church was completed in 1905. In that same year Ealing council enclosed Warwick Dene, at the south-west corner of the common, to create a fragrant rest garden for the elderly and the blind.

Ealing Common station was rebuilt for the arrival of the Piccadilly line in 1932. The common continued to be used for grazing and donkey rides until well into the 20th century but dog-walking is now the prime animal activity.

The Ealing Common ward has a well-educated popu­la­tion and its propor­tion of twenty-some­things is nearly twice the national average.

The Who’s Pete Townshend was an Ealing Common resident at the height of the band’s fame in the 1960s.