A ‘wonder-town of homes’, according to its developers, situated on the south-west side of Hornchurch 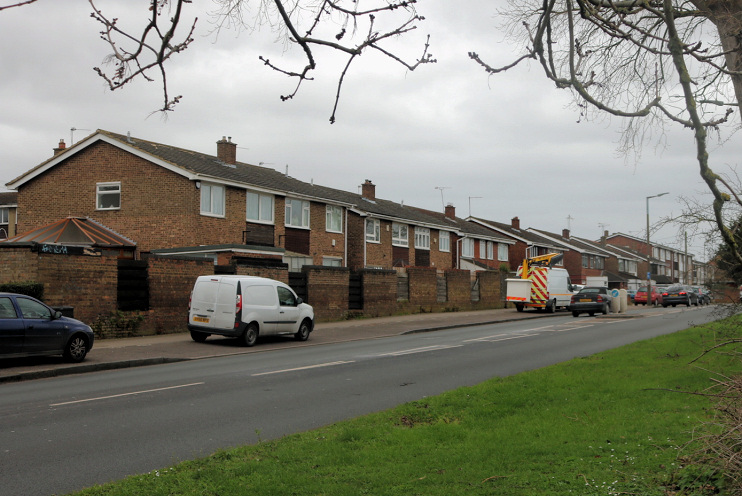 With financial support from the Halifax building society, Liverpool-based Richard Costain and Sons began building here in 1934, partly on the site of Elm Park farm. It is claimed that the layout was influ­enced by the garden city movement, but this is hard to detect.

Costain part-funded the building of Elm Park’s District line station in 1935, after 500 homes had already been completed. It was the last station to open on the line.

A 1937 adver­tise­ment promised “space to breathe the clear air of open Essex. Compare these wide, clean avenues with the narrow, dust-laden streets in which many families unnec­es­sarily remain when they could so easily live healthier, fuller lives at Elm Park.” By the outbreak of war the estate was three-quarters complete.

When hostil­i­ties ceased the council took on the remaining phase of devel­op­ment – but a planned cinema was never built. More shops were added in the 1950s, and later still came further house­building to the south, on part of the former Hornchurch airfield.

St Nicholas church was built in 1955–6, to the south of a temporary church that had been erected in 1936 and was demol­ished in 1994. For the full history of the church, please click here.

Two local schools, Ayloff and Dunning­ford, merged in 2009 to become Elm Park primary school. The mayor of London, Boris Johnson, opened the school’s impres­sive new building on South End Road in September 2011, saying, “Elm Park primary school is an inspi­ra­tion to all of us and what a fantastic place to teach and learn.” After that, Ofsted placed the school in the ‘requires improve­ment’ category until 2016, since when it has been ‘good’.

The local­i­ty’s oldest and largest pub, the Elm Park Hotel, closed in 2013 and its south-west wing became a Sains­bury’s Local.

Future devel­op­ments in Elm Park may include higher density housing, but Hornchurch Residents’ Asso­ci­a­tion has expressed reser­va­tions about such proposals, prefer­ring the neigh­bour­hood to retain its tradi­tion­ally suburban character.

Elm Park is a predom­i­nantly white area, with just a few residents from ethnic minori­ties. At the last census the two largest ethnic minori­ties here were of African and Indian origin or descent, accounting for just four and two per cent of the popu­la­tion respectively.

* The picture of Upper Rainham Road, Elm Park, on this page is cropped from an original photograph, copyright David Howard, at Geograph Britain and Ireland, made available under the Attribution-ShareAlike 2.0 Generic Licence. Any subsequent reuse is freely permitted under the terms of that licence.