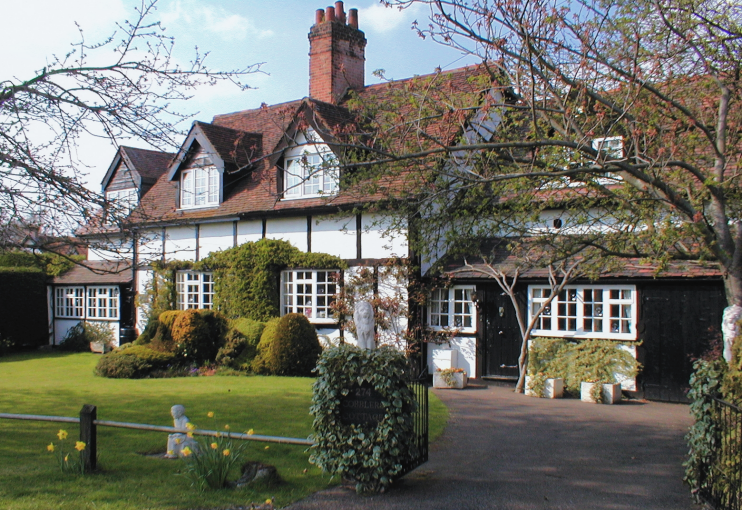 In 1895 William Carter, of Parkstone, Dorset, bought 20 acres of Nelmes Manor and Lee Garden Manor to build ‘country villas for city gentlemen’. Carter put up a wide variety of dwellings, from bungalows to family houses with accom­mo­da­tion for servants, and named the estate after his eldest son, Emerson. Other devel­opers added their own estates, such as Haynes Park and Great and Little Nelmes, but the original name has come to apply to the whole neighbourhood.

The Emerson Park Stores (now a restau­rant) and the Chequers Inn were built in 1899, the latter replacing a “quaint old beerhouse” of the same name. Emerson Park station (orig­i­nally ‘halt’) opened between the two estab­lish­ments in 1909.

Emerson Park is now completely built over, with cul-de-sacs jutting into what were once the gardens of larger prop­er­ties. A surpris­ingly large number of shops and other small busi­nesses stretch along Butts Green Road and North Street either side of the station. North Street’s commer­cial premises persist sporad­i­cally down into Hornchurch, and this vicinity is less well-heeled than Emerson Park proper.

Over 90 per cent of homes in Emerson Park are owner-occupied. At the 2011 census, 82 per cent of residents were white. The district also has one of the borough’s larger commu­ni­ties of Indian heritage. At an average 6.2 rooms per household, residents have much more space than most other Londoners and almost half the house­holds have two or more cars.

The well-regarded Emerson Park academy is a specialist sports college located on the eastern edge of the district, beside the Ingre­bourne River.

Somewhat incon­gru­ously, Emerson Park station found itself embraced by the London Over­ground network at the end of May 2015, following Transport for London’s takeover of the Upminster–Romford branch line. As Diamond Geezer explains: “TfL didn’t really want to take this one over. A single track branch line means no chance of a more frequent service, and a severed track at Upminster means no hope of rebranding this as a spur of the District line. But they were forced to assume control as part of the deal that delivered the rest of the Over­ground lines handed over this week, and hence this minor irrel­e­vance now appears on the actual tube map.”