A ‘flagship development of regional significance,’ according to the government at the time of its inception, built on a 100-acre flood plain beside the River Lea 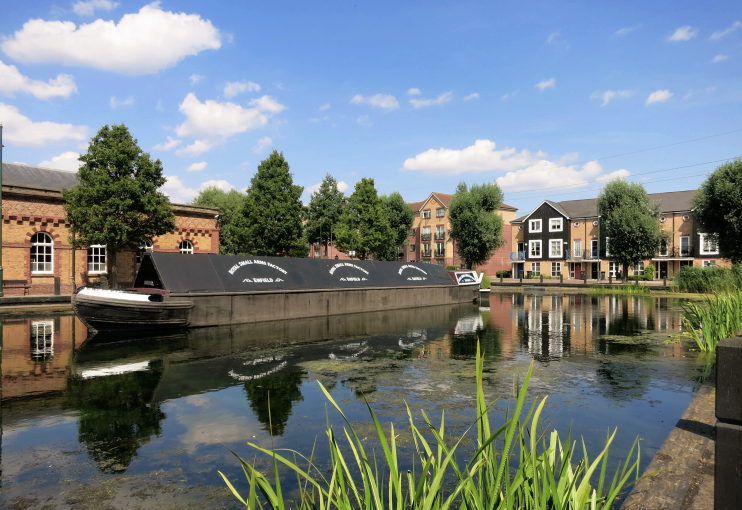 Occupying the former site of the Royal Small Arms Factory, Enfield Island Village was built from 1997 to 2003 by Fairview New Homes between the River Lea (or Lee) and the Cattle­gate Flood Relief Channel. Some original buildings have been retained and the design incor­po­rates a network of waterways, creating a habitat for waterfowl.

There are distinct neigh­bour­hoods within the village, each with its own archi­tec­tural vari­a­tions. The council initially imposed a limit on the number of homes that could be built before shops and community services were provided, but this was later withdrawn. The devel­opers also increased housing density from their original proposals, with a higher propor­tion of social accommodation.

Enfield Island Village featured promi­nently in a 2000 inves­ti­ga­tion by the BBC TV programme Panorama into housing devel­op­ments on cont­a­m­i­nated land. It reported that a survey had found traces of toxic chemicals and metals such as lead, cadmium, arsenic and copper.

The soil has been ‘reme­di­ated’ by capping with a layer of clay to prevent cont­a­m­i­nants leaching to the surface but there have been stories of children suffering derma­to­log­ical problems after playing in their back gardens, and residents have been warned not to dig more than three feet down.

There was further disquiet when Enfield’s chief planning officer left to join Fairview. The borough subse­quently convened a special panel to inves­ti­gate the various alle­ga­tions surrounding the project, which were refuted as “unsub­stan­ti­ated rumours.” However, “robust and permanent moni­toring” of the site was recom­mended for the future and the report was narrowly adopted by the council.

Later there were issues with the gover­nance of the Enfield Island Village Trust – and in 2014 the Charity Commis­sion stepped in to conduct an inves­ti­ga­tion. In 2016 a new governing document was adopted and a new board of trustees was elected.

* The pictures of the canal Boat in the Village and the water tower on this page are both adapted from original photographs, copyright Des Blenkinsopp, at Geograph Britain and Ireland, made available under the Attribution-ShareAlike 2.0 Generic Licence. Any subsequent reuse is hereby freely permitted under the terms of that licence.