Also spelt as two words, Freezywater is a lacklustre residential locality stuck out on a limb in the north-east corner of Enfield, south of the M25 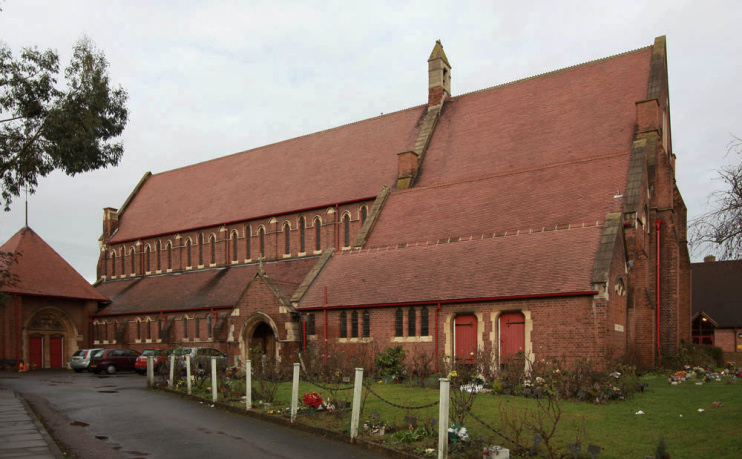 A farm called Freezwater [sic] was first recorded here in 1768, taking its name from a local pond that was lost when sewage works were built on Ramney Marsh. The bleakly exposed pond quickly froze over in cold weather, hence its name. In 1819 it was Freezy Water. The place name is nowadays usually spelt as one word, although not on Google’s map below.

Freezy­water was one of the last parts of Enfield to attract the interest of builders or house­buyers. To the west of Hertford Road, the United Counties Land, Building and Invest­ment Society acquired an estate near Freezy­water Farm in 1881 and laid out Holly Road, Oakhurst Road, and Holmwood Road. A few houses had appeared by 1897 but other plots remained empty for decades.

The cavernous parish church of St George – shown in the photo­graph above* – and the neigh­bouring St George’s school were built in the early 1900s. The electric tramway route along Hertford Road reached Freezy­water in 1907. Despite these amenities, growth remained slow and the estab­lish­ment after the First World War of a new nursery (for raising fruit and vegeta­bles, not children) indicated the contin­uing absence of demand. Freezy­water even­tu­ally filled out with terraced and semi-detached houses in the decades following the Second World War.

The majority of Freezy­wa­ter’s residents are white, although a growing minority come from black Caribbean and black African back­grounds. According to Ofsted in 2013, most of the pupils at Freezy­water St George’s primary school were from minority ethnic groups and the propor­tion who speak English as an addi­tional language was slightly above average.

The recently rede­vel­oped area to the east is often consid­ered to be part of the Enfield Lock locality – but it was the site of the eponymous frozen pond of Freezy­water (though Freezy­water Farm was on Hertford Road). It has been defined as a ‘strategic employ­ment location’ but the council’s proposals to improve acces­si­bility via a new (indirect) link to the M25 from Mollison Avenue were rejected at a public inquiry in 2002. Ramney Marsh sewage works have been replaced by the Innova business park, which was intended to be primarily an enter­prise zone for science companies – hence street names like Kinetic Crescent and Velocity Way.

After a stut­tering start, the Innova plan was revised to include proposals for social housing units and the Oasis academy, which opened in September 2007 in temporary accom­mo­da­tion and moved to a permanent building the following year. The academy’s name is not a glam­or­ised version of ‘Freezy­water’ but a reflec­tion of its spon­sor­ship by the Christian organ­i­sa­tion Oasis.

The Innova Business Park’s Sony distri­b­u­tion centre was looted and destroyed by fire during the riots of August 2011. Prime minister David Cameron opened its replace­ment on the same site 13 months later.

* The photo of St George, Hertford Road, Freezywater, at the top of this page is adapted from an original photograph, copyright John Salmon, at Geograph Britain and Ireland, made available under the Attribution-ShareAlike 2.0 Generic Licence. Any subsequent reuse is hereby freely permitted under the terms of that licence.