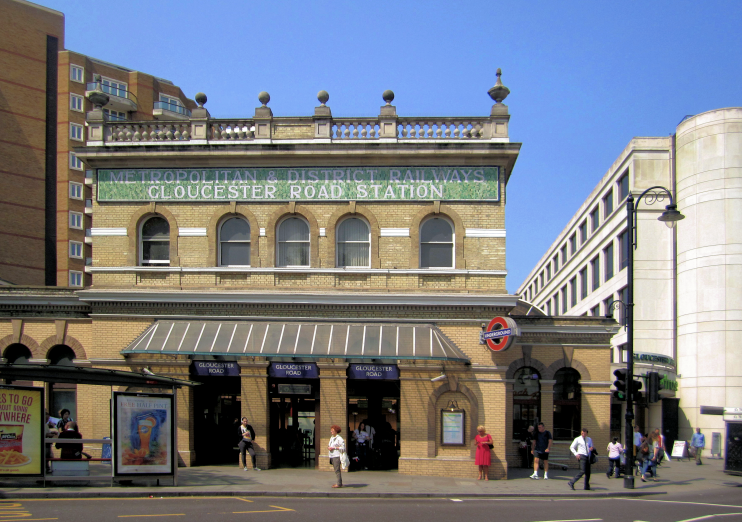 From the early 17th century this was Hogs Moor or Hogmire Lane and it was the site of an ulti­mately unsuc­cessful pleasure garden (and for a while a pick-your-own fruit and flower farm) in the late 18th century. At that time most of the vicinity was filled with nurseries and market gardens.

George III’s sister-in law Maria, Duchess of Gloucester built herself a house called Villa Maria (later Orford Lodge) on part of the pleasure garden’s site in 1805, and she died there two years later. The politi­cian George Canning bought the property in 1809 and retained it until 1825. The house (latterly called Gloucester Lodge) stood in extensive grounds close to what is now the south-east corner of Gloucester Road’s junction with Cromwell Road.

Much of the surrounding area was built up in the second quarter of the 19th century or soon after­wards. The more signif­i­cant projects included: 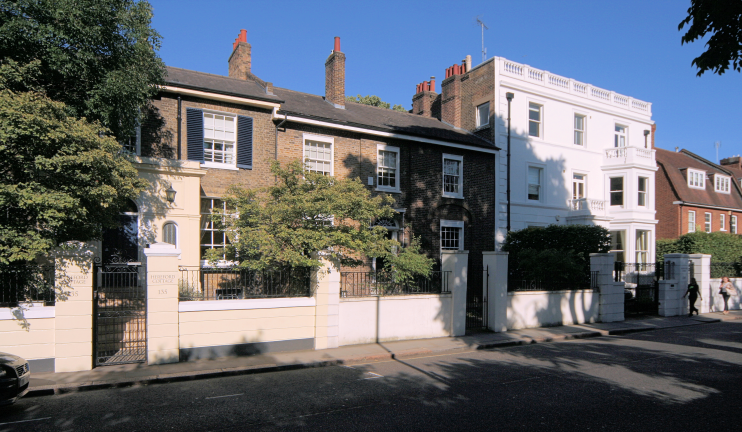 Gloucester Lodge was demol­ished shortly after 1851, by which time almost everyone had stopped calling the thor­ough­fare Hogmire Lane and started calling it Gloucester Road – as had been suggested by the Kens­ington Turnpike Trustees soon after the duchess had died.

From 1862 two developer-builders began laying out Cornwall Gardens on land that had belonged to members of the Broadwood piano-making family since the start of the century. The street was named in honour of the Prince of Wales (also Duke of Cornwall), who came of age in November 1862. Cornwall Gardens quickly became popular with high-ranking admin­is­tra­tors, lawyers and soldiers, espe­cially those who had recently returned from colonial duties in India. Kynance Place and Mews were created at the same time, orig­i­nally as St George’s Place and Cornwall Mews.

Palace Gate was also laid out in the 1860s, forking left at the north end of Gloucester Road, which had hitherto forked right and continued up to Kens­ington Road.

Some grand Ital­ianate terraces were built on Gloucester Road itself during this period. They were later converted to flats or hotels, or replaced by mansion blocks or rows of shops with flats above.

The cosy, ornate church of St Stephen was conse­crated in 1867. In the following year the Metro­pol­itan Railway opened a branch line from Edgware Road to Brompton (Gloucester Road), as the station was orig­i­nally called. John Fowler was the station’s (highly paid) engineer and architect. District Railway trains also began serving Brompton a few months after it had opened.

Part of Kens­ing­ton’s Alexander estate, the west-central section of Gloucester Road and its hinter­land began to fill with high-class housing as soon as devel­opers knew the railway was coming. From an early stage, it was intended to build a substan­tial hotel on the south corner of Gloucester Road and Court­field Road. The entre­pre­neurial son of a Norfolk farmer, James Bailey soon became involved in the project and the main part of his hotel was completed in 1876, though it was subse­quently extended in several stages.

Designed by Leslie Green, Gloucester Road Piccadilly line station opened in 1906, next door to the original station on the corner of Court­field Road. (See Wikipedia’s article for a full account of the station’s compli­cated history.)

Kens­ington New Town’s St George’s Terrace was demol­ished in 1907 and replaced by St George’s Court (42–72 Gloucester Road), which has shops at street level and flam­boyant redbrick and flats above, with stone dressings. The architect was Paul Hoffman, who was respon­sible for several large commer­cial and resi­den­tial blocks in Kens­ington and the West End. Incom­pat­ibly, the Survey of London (ed. Hermione Hobhouse) calls St George’s Court ‘dowdy’ while The Buildings of England (ed. Nikolaus Pevsner) calls it ‘jubilant’.

Sections of Gloucester Road were rede­vel­oped at regular intervals after the Second World War, beginning with the replace­ment of bomb-damaged prop­er­ties. This has resulted in some archi­tec­tural incon­sis­tency, espe­cially among the houses towards the southern end of the road.

In the early 1970s Bailey’s Hotel was threat­ened with demo­li­tion, which the Royal Borough of Kens­ington and Chelsea cred­itably resisted. The Bailey’s Hotel, as it now preten­tiously called, is presently operated by Millen­nium Hotels.

In 1989 a large shopping and office complex was built behind Gloucester Road station, spanning the District and Circle line tracks. As part of the devel­op­ment, the twin stations were remod­elled inter­nally to share a single entrance, which is shown in the photo at the top.* The redundant Piccadilly line station building was divided into retail units.

In addition to its hotels, Gloucester Road has many short-stay apart­ments and studio flats, while a plentiful supply of bars and cafés caters to both tourists and residents. The local­i­ty’s best-known restau­rant is probably the Bombay Brasserie, which opened in 1982 in a corner of Bailey’s Hotel that had once been the site of its stables.

Long-term residents of Gloucester Road and its neigh­bouring streets tend to be affluent and in good health. Many are employed in financial and insurance activ­i­ties, often working long hours. Like other parts of Kens­ington, demo­graphic data for this locality bears little resem­blance to the picture for London as a whole. To take one example from the 2011 census, non-British residents were more likely to have been born in France or the United States than any other country.

The author JM Barrie lived at 133 Gloucester Road between 1895 and 1902, the period in which he conceived the story of Peter Pan.

In his Literary Guide to London, Ed Glinert calls TS Eliot ‘the Pope of Gloucester Road’ in an allusion to the poet’s 25 years as warden of St Stephen’s church. Eliot lived in nearby Grenville Place from 1933 to 1940.

* The picture of Gloucester Road station at the top of this page is adapted from an original photograph, copyright La Citta Vita, at Flickr, made available under the Attribution-ShareAlike 2.0 Generic licence. Any subsequent reuse is freely permitted under the terms of that licence.