An amorphous area of variable quality housing plus a trading estate and a large park, lying just inside the Greater London border, to the east of Feltham 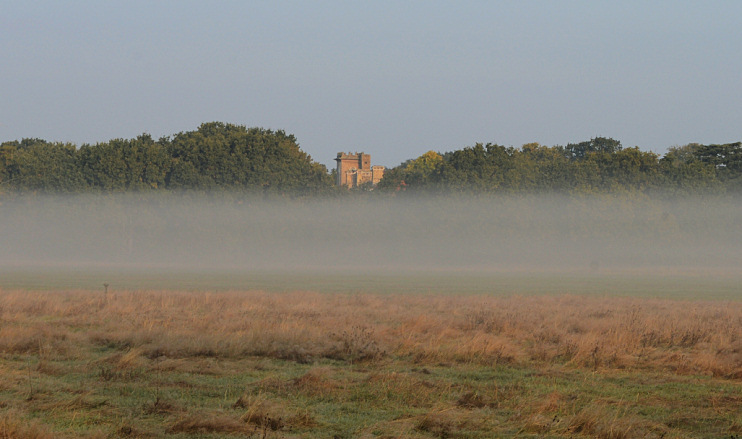 Hanworth was first recorded in Domesday Book. A ‘worth’ was an enclosed settle­ment, while the ‘Han-’ element probably derives from a personal name.† St George’s Church was in existence by 1293. The manor of Hanworth came into the hands of the Crown through an exchange of lands in 1512.

Hanworth House (also sometimes called Hanworth Manor, Castle or Palace) was the hunting lodge of Hanworth Park, which Henry VIII granted to Anne Boleyn for life. As Anne’s life turned out to be shorter than expected, Henry later settled the property on his last wife, Katherine Parr. In the second quarter of the 17th century the Hanworth Park estate was owned by Baron Cottington of Hanworth, and Queen Henrietta Maria stayed here in 1635 while the plague raged in London. The house’s stable block survives as the grade-II listed flats of Tudor Court, shown in the photo below.

Hanworth House itself was destroyed by fire in 1797 and replaced by a smaller villa, but this was demol­ished three-quarters of a century later.

The medieval church was rebuilt in two phases during the 19th century. In the late 1820s (or there­abouts) the 100-room Hanworth Park House was built to the north of the church and this survives today, though in a state of dereliction.

From 1917 until the opening of Heathrow Airport, aircraft were constructed and tested in Hanworth Park, which is now public open space.

The vast majority of Hanworth’s resi­den­tial and indus­trial premises were built between 1919 and 1939, including the devel­op­ment of Butts Farm, supple­mented by post-war council estates and some more recent wholesale and retail ware­houses. What had survived of the old village of Hanworth was mostly sacri­ficed to the construc­tion of the M3 feeder road (the A316) in 1973.

The locality near the corner of Uxbridge Road and Hounslow Road (marked with a red pin on the map below) is known as the Mount, from an extant, earth-covered icehouse built in what were formerly the grounds of Hanworth House. A summer­house once stood either on top of the Mount or on the site where the Mount was later created. For an in-depth review of the available evidence on the subject of the Mount, the icehouse and the summer­house, see this page of Side­tracks in History. Whatever its origins, Mount Corner is now so densely covered with trees that you can barely see there’s any kind of mound there at all.

For a number of years, plans have been under consid­er­a­tion (and then recon­sid­er­a­tion) to restore Hanworth Park House and build apartment blocks around it. These plans may finally be approaching fruition, along the lines shown in the developer’s CGI below. Local residents usually object to such proposals, espe­cially when they involve the loss of some parkland, but the general consensus here seems to be that anything that helps save the historic house is broadly acceptable. 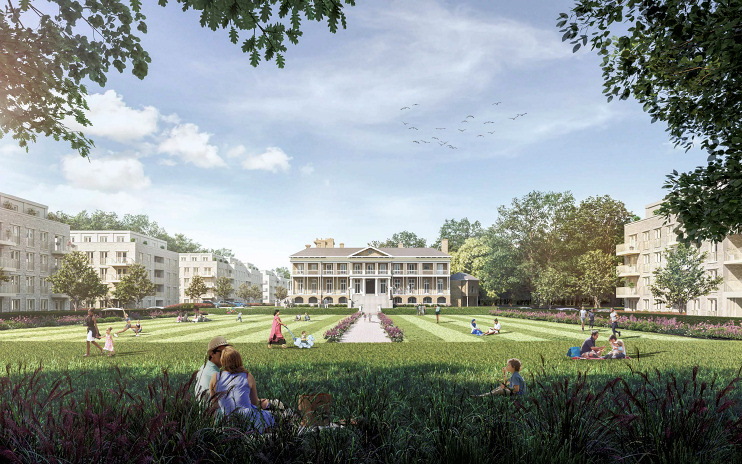 Princess Elizabeth (later Elizabeth I) came to live at Hanworth House at the age of 15. After she became queen, Elizabeth returned to the house on several occasions, often hunting on Hounslow Heath.

* The picture of Hanworth Park, with Hanworth Park House, at the top of this article is adapted from an original photograph, copyright habiloid, at Geograph Britain and Ireland, made available under the Attribution-ShareAlike 2.0 Generic Licence. The picture of Tudor Court is adjusted from an original photograph, copyright Maxwell Hamilton, at Flickr, made available under the Attribution 2.0 Generic licence. Any subsequent reuse is freely permitted under the terms of those licences.

† Wikipedia, citing Andrea Cameron’s pictorial history, suggests that the han in Hanworth signified ‘small’ but Hidden London can’t find any evidence that hæn/han meant ‘small’ in Anglo-Saxon (it usually meant ‘hen’) and prefers the Oxford Dictionary of London Place Names’ verdict: “probably ‘enclosed settlement of a man called Hana’.” Hana (meaning cock, in the sense of the male domestic fowl) was a common masculine moniker back then. All the early spellings of the place name had an extra vowel in the middle (including Haneworde in Domesday Book, Haneworth in 1359 and Hanneworth in 1389), which would have been unlikely to have crept in if the origin had been hæn/han.