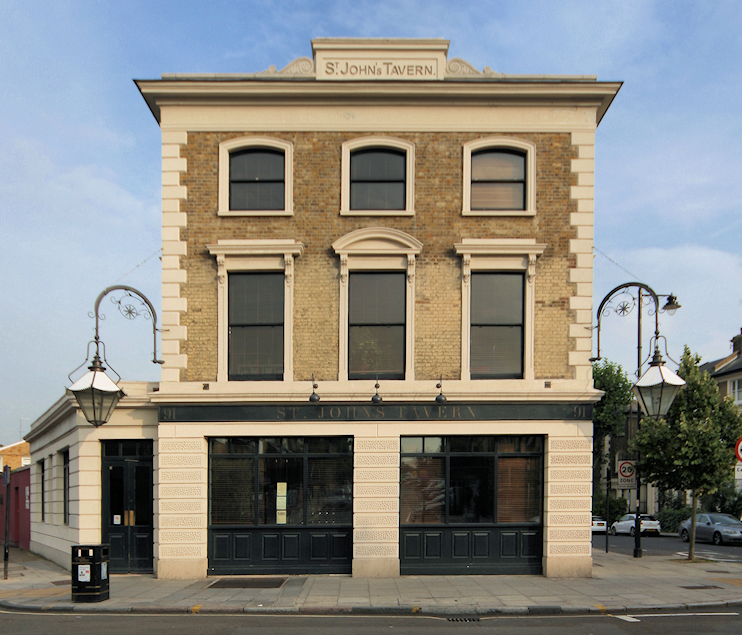 Junction Road was constructed as a feeder for the new Archway Road in 1813. Much of the area’s original devel­op­ment was as cheap housing for working people who were displaced from St Pancras and Somers Town by the railway building of the mid-19th century.

Junction Road Congre­ga­tional church was built in 1866–7 at the bifurcate junction with Tremlett Grove. Following at least two changes of religious affil­i­a­tion in its latter years, the church has since been divided into the flats of St Christo­pher’s Court.

Shown in the photo­graph above, St John’s Tavern became an archi­tec­tural landmark when it was built around the same time as the church.

Near the northern end of the street, the baroque and asym­met­rical Royal London Friendly Society building was completed in 1903. It is now home to a firm of solicitors.

Station Road marks the site of the former Junction Road railway station, which operated from 1872 to 1916, after which it was used solely by goods services until finally closed in 1960. Commuter groups continue to lobby for the station’s reopening, so far without success.

In 2004 Junction Road was branded “the worst street in the borough” for its level of grime, graffiti and “festering rubbish”.

Islington council has since put some effort into enhancing the streetscape, notably by co-funding the restora­tion of St John’s Tavern, which is now a highly regarded gastropub. Completed in 2010 with assis­tance from English Heritage, the project has rein­stated the stucco work and timber shopfront at ground floor level and recreated the original hanging brass lanterns at each corner.

In addition to St John’s Tavern, the locality boasts a plethora of pleasing pubs, including the Oak and Pastor, the Boston Arms and, a little farther south, the Junction Tavern.

* The picture of St Christopher’s Court on this page is adapted from an original photograph, copyright Julian Osley, at Geograph Britain and Ireland, made available under the Attribution-ShareAlike 2.0 Generic Licence. Any subsequent reuse is freely permitted under the terms of that licence.