A historically poor and densely populated locality situated immediately west of Dalston, of which it is nowadays considered a part 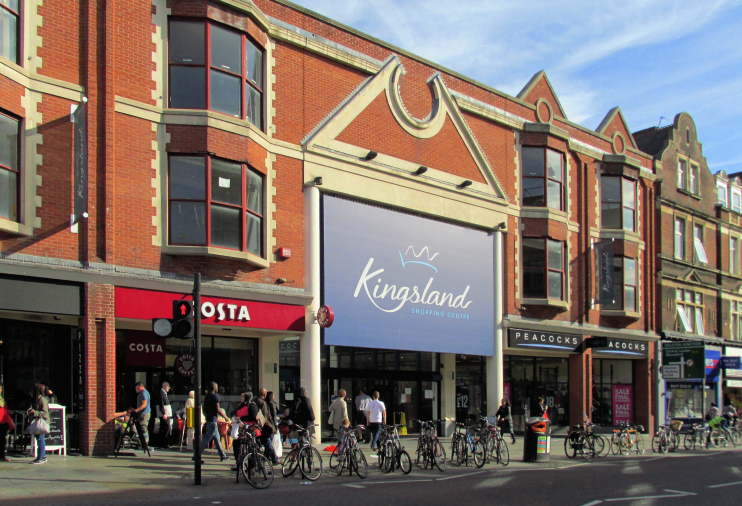 Kings­land’s name derives from the former royal ownership of parts of Hackney. Samuel Pepys wrote in 1667 that he had boarded here as a boy, “and used to shoot with my bow and arrows in these fields. A very pretty place it is.”

At that time the hamlet was slightly more populous than Dalston and it grew more rapidly in the 18th century, with inns strung out along what became Kingsland High Street and farm­houses behind. During the first quarter of the 19th century some terraces of very cramped houses were built, creating an increas­ingly sharp contrast with the early stages of respectable subur­ban­i­sa­tion in Dalston.

In 1822 the construc­tion of Kingsland basin on the Regent’s Canal began to bring industry and ware­housing to the southern end of the district. In the north, Kingsland station opened in 1850 but closed when Dalston Junction opened in 1865.

Without a station to its name Kingsland’s identity withered; some late Victorian maps do not label it sepa­rately, already treating the area as part of Dalston’s sprawl. In the 1880s Kingsland Green was built on, despite local protests.

Throughout the 20th century Kings­land’s name continued to fade from view. For example, the Kingsland Empire cinema, which had opened in 1915, was rebuilt in 1937 as the Dalston Classic, which is now the excellent Rio.

The old station reopened as Dalston Kingsland with the creation in 1985 of the North London line, which is now part of the London Over­ground network.

Kingsland High Street has a hotch-potch of inex­pen­sive shops and other commer­cial premises. Kingsland Waste, the stretch of Kingsland Road between Forest Road and Middleton Road, hosts a long-estab­lished Saturday market selling all kinds of goods, focused since a 2018 relaunch on vintage clothing, ‘retro’ or antique items and collectables.

With the recent appear­ance of upmarket apartment blocks, the locality now exhibits what is becoming the typical inner-east London profile: a cheek-by-jowl social mix. But, whatever its character, everyone calls it Dalston now, not Kingsland – except at Kingsland shopping centre.

* The picture of Kingsland shopping centre at the top of this page is adapted from a photograph originally posted at Flickr, copyright David Holt, made available under the Attribution 2.0 Generic licence. Any subsequent reuse is freely permitted under the terms of that licence.