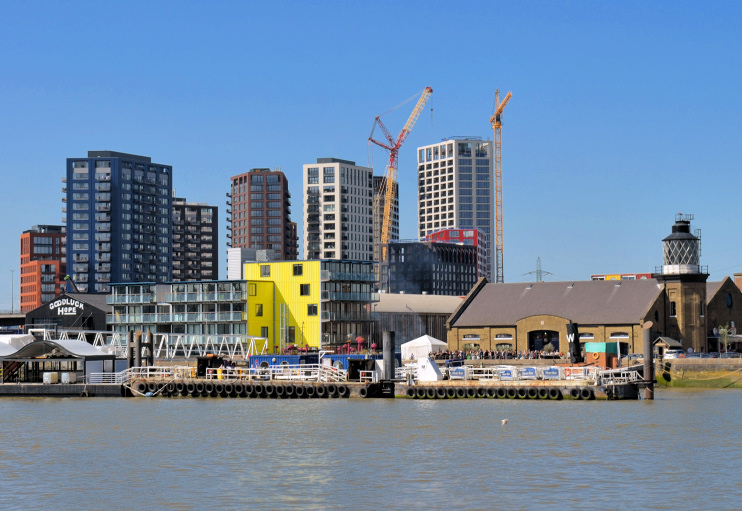 Although there are records of ships being unloaded here as early as 1297, there was little human activity besides some farming and fishing until the late 16th century, when a house was built, with an orchard and a moat. A second incar­na­tion of the house became a pub early in the 18th century.

The creation of the East India Dock in 1803–6 made road access to Leamouth even more difficult but encour­aged indus­trial devel­op­ment and the construc­tion of homes for workers. The northern peninsula – known at first as Gode­lock­hope and later as Goodluck Hope* – was home to a plate glass factory from the 1830s and subse­quently to a galvanised ironworks.

Orchard House remained a licensed premises until the 1860s, with ancillary buildings including a bakehouse and a cowhouse, and a skittle ground in front of the premises. The pub was demol­ished in the early 1870s, after a survey had reported that it was “in such an utterly tumble down condition that there is no alter­ation except to pull it down,” and its site was turned into a boatyard.

By the late 19th century the vicinity of Orchard Place had become “a deprived area, inhabited by rough, very poor people, living in over­crowded condi­tions,” according to the Survey of London: Poplar, Blackwall and Isle of Dogs. “Largely cut off from outside influ­ences … this was a closed and closely knit community, inward-looking and inbred, or as the LCC Education Officer politely put it, ‘many families have the same rather uncommon names’.” Almost all Leamouth’s homes and shops were demol­ished in a slum clearance project in the mid- to late 1930s – and some 300 inti­mately related residents were moved out of the area.

Galvanised iron manu­fac­ture continued at Goodluck Hope until the 1960s, when a vegetable oil refinery took posses­sion of nearly all the peninsula. The refinery operated until the early 21st century.

Leamouth’s most enduring employer was the Corpo­ra­tion of Trinity House, the body estab­lished in the 16th century to maintain beacons, marks and signs of the sea “for the better navi­ga­tion of the coasts of England.” From 1803 to 1988 the corpo­ra­tion’s Thames-side workshop occupied the tip of the eastern peninsula, making and deploying navi­ga­tion buoys and sea marks, and later also testing maritime lighting equipment and training light­house keepers.

The corpo­ra­tion’s Trinity Buoy Wharf is now a centre for arts and community projects (some operating from colour­fully converted shipping containers), while the restored chain­store – complete with London’s only light­house – hosts leisure and cultural events. There’s also an American-style diner and a container-based café. Founded in 2009, Faraday is an inde­pen­dent primary school located at the north-east corner of Trinity Buoy Wharf. 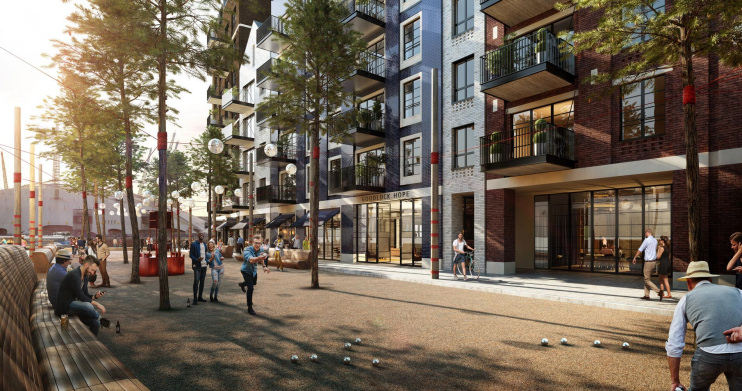 Since 2015 almost all of Leamouth’s two penin­sulas except for Trinity Buoy Wharf have been regen­er­ated by the Ballymore Group, a Dublin-based inter­na­tional property devel­op­ment company. Goodluck Hope has become London City Island, while the devel­op­ment on the eastern peninsula (shown in Bally­more’s CGI above) has – oddly – been named Goodluck Hope. Still, it’s nice that this quaint old name is being kept alive, even if it’s in the wrong place. The English National Ballet and the London Film School have been persuaded to relocate to what the devel­opers are calling a “mini-Manhattan on Leamouth Peninsula.” It’s all a far cry from inbreeding and galvanised iron.

* “The second largest land holding in the area at the beginning of the nineteenth century comprised most of the north-pointing thumb-like promontory embraced within the last loop of the River Lea before its confluence with the Thames. Formerly part of the demesne of the manor of Stepney, this peninsula of some nine acres was known in the fourteenth century as Godelockhope or Godluckhope, and more recently as Goodluck Hope.” British History Online: Leamouth Road and Orchard Place: Historical development.

The picture of Trinity Buoy Wharf at Leamouth at the top of this page is slightly modified from an original photograph, copyright Dun.can at Flickr, made available under the Attribution 2.0 Generic licence. Any subsequent reuse is freely permitted under the terms of that licence.