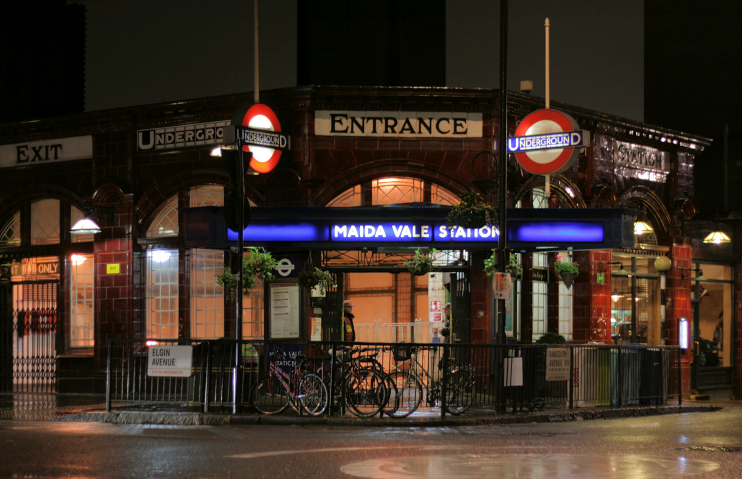 This area belonged to the Bishop of London in 1647, when it was covered by woodland and pasture. There were no struc­tures apart from farm buildings until the end of the 18th century. Houses were built after 1807, to spec­i­fi­ca­tions laid down by the Church, which included the use of stock bricks and slate roofs.

A short stretch of the Edgware Road was called Maida Vale in 1828 although the name was not applied to the neigh­bouring locality until much later in the century. For more on the history of the ‘Maida’ name, see the page on Maida Hill.

The main thor­ough­fare was lined with villas by the 1840s but several decades elapsed before the hinter­land filled with houses , many built with red or multi-coloured bricks in a style advocated by John Ruskin.

In the 1880s Maida Vale gained a large Jewish community, perhaps consti­tuting as much as a fifth of the area’s residents. From around this time early villas began to be demol­ished and replaced by flats. The trend reached its peak in the early years of the 20th century when massive mansion blocks went up on the main road, with smaller blocks in the streets behind. Clarendon Court even boasted its own restau­rant and booking office for theatres.

Maida Vale station opened in 1915, with one of the few buildings above ground on this section of the Bakerloo line. In 1933 Maida Vale recording studios were built on the site of a skating rink to house the BBC Symphony Orchestra. The name ‘Maida Vale’ later became almost synony­mous with ‘live’ studio music, courtesy of Radio 1’s sessions, espe­cially with John Peel.

The Greater London Council built its Maida Vale estate in the early 1970s and the Church Commis­sioners sold the freeholds on its prop­er­ties in the following decade. Maida Vale maintains a repu­ta­tion as an address for wealthy dowagers, but in fact it has fewer pensioners living alone than most parts of the borough and most residents have never been married.

Maida Vale was the birthplace in 1855 of William Friese-Greene, the inventor of ciné film.

The district was made famous by Alfred Hitchcock’s Dial M for Murder in 1954, when a call to the Maida Vale telephone number MAI 3499 was the signal for a killing at the fictional 61a Charrington Gardens. The film was based on a 1952 West End play.

* The picture of mansion flats in Maida Vale on this page is adapted from an original photograph, copyright David Hawgood, made available under the Attribution-ShareAlike 2.0 Generic Licence. Any subsequent reuse is hereby freely permitted under the terms of that licence.