A London Underground station, and by extension its immediate vicinity, located at the easternmost corner of Finsbury Park 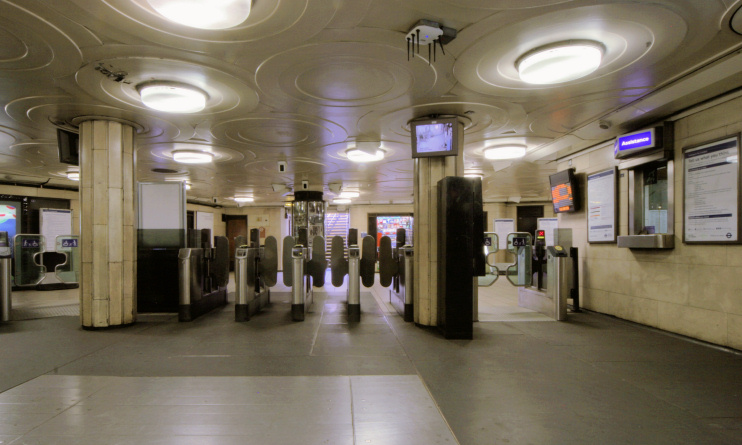 Before the creation of Seven Sisters Road, and thus of the cross­roads, this was the site of a tollgate on Green Lanes. The Manor Tavern, later the Manor House, was built here in 1832 by Thomas Widdows of Church Street, Stoke Newington, who was allegedly “a most lasciv­ious old fellow.”

The public house had a licensed concert room from 1852 and boasted of a brief visit by Queen Victoria. For several years it was the meeting place for the Stoke Newington vestry.

In 1931 the imminent arrival of the Piccadilly line prompted the widening of the cross­roads and the demo­li­tion of the old pub, which was then rebuilt in its present form.

The station’s subsur­face layout was by Charles Holden, who was respon­sible for much of the archi­tec­ture on the extended Piccadilly line.

Opened in 1932, Manor House is the only one of Holden’s stations that does not include struc­tures at street level, though the large booking hall (shown in the photo­graph above) broke new ground in assisting passenger flow; Holden described it as “an exper­i­ment in stream­lined planning.”

The station gave Hackney its first tube connec­tion, albeit at a remote corner of the borough, and this was a signif­i­cant factor in the London County Council’s decision to compul­so­rily purchase a great swathe of land here for the construc­tion of the Woodberry Down estate. The outbreak of war halted the estate’s devel­op­ment, which was not finally completed until 1962.

The Manor House pub, which had been under­going a steady decline, closed at the end of the last century and an organ­i­cally inclined foodstore presently occupies most of the ground floor.

The Rolling Stones played weekly gigs at the Manor House in February and March 1963, when the pub hosted the Harringay Jazz Club. Shortly before its closure Bill Wyman commented that the Manor House was “about the only old Stones venue that still exists” from the band’s early days. The Who also performed at the Manor House, in 1965.