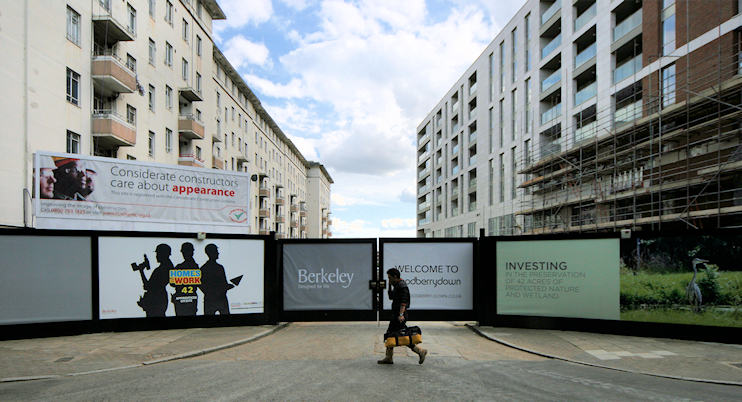 This was dairy farmland until the 1820s, when it was opened up by new roads. The conver­sion of disused clay pits into reser­voirs alle­vi­ated the threat of flooding.

By the early 20th century this had become “the posh end of Stoke Newington,” home to several wealthy Jewish families and to Albert Chevalier, the music hall artiste.

In 1934, despite powerful oppo­si­tion, the London County Council compul­so­rily purchased all of Woodberry Down and the construc­tion of an ‘estate of the future’ began after the Second World War. By the time the project was completed in 1962, 57 blocks of flats had been erected on 64 acres of land.

The 2,500 homes had a mix of deck access and lobby access, with the majority being two- or three-bedroom flats. Woodberry Down school (since closed) became one of Britain’s first purpose-built compre­hen­sives in 1955.

As with some other utopian schemes of a similar nature, Woodberry Down became a flawed place in which to live, with an array of char­ac­ter­istic inner-city issues. There were few amenities and the flats suffered from water pene­tra­tion and other struc­tural problems.

An ongoing regen­er­a­tion plan is providing new and refur­bished housing and aiming to improve the ‘life chances’ of residents. However, in order to fund the project, Hackney council has permitted a high propor­tion of the prop­er­ties on the rebuilt part of the estate to be sold at market prices – often upwards of half a million pounds. Critics dubbed this “state sponsored gentrification.”

In defence of the council, as Municipal Dreams points out, “it can be said they had little option in financial terms – public funding for large-scale council housing devel­op­ment was simply not available. Moreover, the actual council housing stock was not dimin­ished and the propor­tion of ‘afford­able’ homes was – at 41 per cent – rela­tively high.”

The ‘new luxury devel­op­ment’ was at first going to be called Woodberry Park but the whole caboodle later adopted the Woodberry Down name.

In the first episode of the TV sitcom Birds of a Feather, Sharon reveals that Tracey and Darryl were childhood sweethearts who “met at Woodberry Down comprehensive in detention.”