A high-density, high-price housing estate in north-east Hornsey, built on the 15-acre site of a former waterworks in the early years of the 21st century 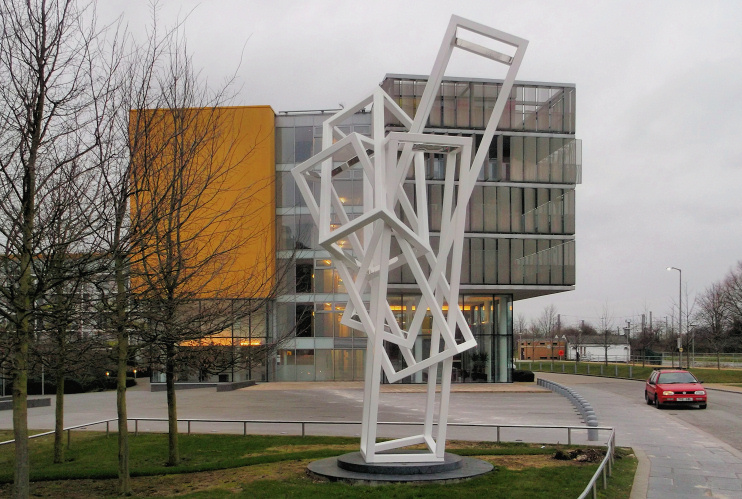 The New River is an arti­fi­cial waterway constructed in the early 17th century to bring potable water from Hert­ford­shire to London. Following alter­ations to the river’s course – erad­i­cating what had been known as the Hornsey loop – and the intro­duc­tion of laws requiring London water companies to filter their output, the New River Company estab­lished the Hornsey water­works in the late 1850s.

The site was recon­fig­ured from the 1880s onwards, and the surviving red-brick buildings dotted around the perimeter of what is now New River Village were the last to be constructed by the New River Company before the Metro­pol­itan Water Board took over in 1904.

At the end of the 20th century Thames Water built a new water treatment plant beside the reservoir (located just beyond the top of the map below), vacating the southern half of the site and freeing it up for redevelopment.

Designed by the trendy urban archi­tects Stock Wool­s­ten­croft (now Stockwool), New River Village is one of several London projects under­taken by St James, a joint venture between Thames Water and private devel­opers the Berkeley Group exploiting the oppor­tu­ni­ties offered by disused utilities sites. When the ‘village’ was completed in 2008 it consisted of 622 studios and apart­ments in nine blocks with under­ground car parking.

A (narrow) linear park borders the New River and the Victorian pump house at the entrance to the estate was converted into a restau­rant – which has since changed hands two or three times.

The scheme’s highly publi­cised USP was an arrange­ment sponsored by St James and facil­i­tated by ‘cultural brokers’ Futurecity allo­cating the pump house annex to Royal Academy of Arts schools’ students as a gallery and studio complex. This didn’t last long and in 2011 St James sold the gallery to Jehovah’s Witnesses for conver­sion to a Kingdom Hall. The “ground­breaking cultural part­ner­ship” has since been airbrushed from the history of all involved, though at the time of writing it still appears on Futurecity’s abandoned Pinterest page.

New River Village’s archi­tec­ture won several awards. Some critics expressed fears that its “brash appear­ance” might not date well but it has at least stood the test of the decade that has passed since its creation.

* The picture of New River Avenue (sculpture and Amazon Apartments) at the top of this page is adapted from an original photograph, copyright David Anstiss, and the picture of the Pump House is adapted from an original photograph, copyright Julian Osley, both at Geograph Britain and Ireland, made available under the Attribution-ShareAlike 2.0 Generic Licence. Any subsequent reuse is freely permitted under the terms of that licence.