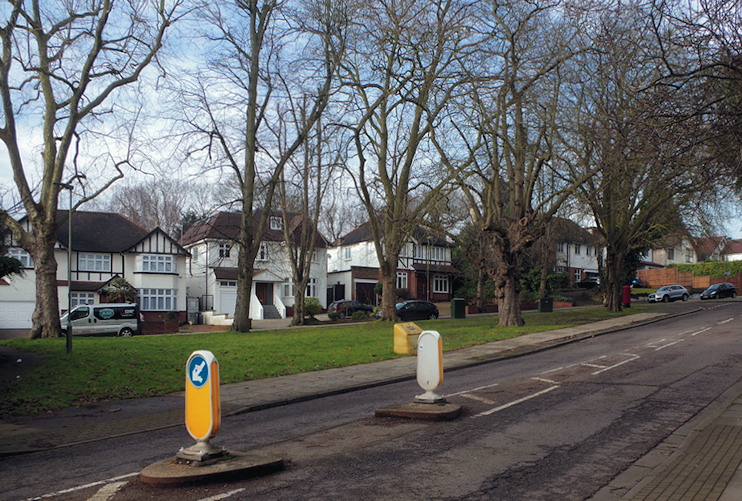 Oakleigh Road is an old route, called Avern­street in 1499 and by a number of other names in subse­quent centuries, but its present identity dates from the Whetstone Freehold Estate Company’s invention of the Oakleigh Park name after it acquired land here in 1869. Until then this had been Matthews Farm, the property of the Haughton Clarke family, who had made their money from the slave trade. When the station opened here in 1873 the estate company ensured that it too was named Oakleigh Park.

The WFEC set out to build a high-class estate to capi­talise on the quality of the wooded and undu­lating landscape and aimed to include a variety of morally and phys­i­cally improving facil­i­ties at the showpiece Athenaeum Institute, which opened in 1881 with a grand concert.

All Saints’ church was completed in 1883, with the spon­sor­ship of Friern Barnet bigwig John Miles, who also laid out Myddelton Park, the street that runs south of the church. All Saints’ is notable for its elaborate interior deco­ra­tion, which took decades to finish.

After an early flurry of interest the Oakleigh Park project soon ran out of steam. By the beginning of the 1890s Athenaeum Road and Oakleigh Park North and South had only 56 houses between them, while the institute was being used for commer­cial purposes – which continued in various forms for the remainder of its existence. Other attempts to colonise the area were also slow to bear fruit.

The former estate of the duke of Buck­ingham and Chandos was sold in 1892 but only Chandos Avenue had been partially developed by 1920. All Saints’ Road, now Oakleigh Avenue, was still an empty track at this time. Oakleigh Park was even­tu­ally built up by the outbreak of the Second World War, partly by the council, which put up a 36-acre estate in the Russell Road area and in 1928 opened All Saints’ School. New Ideal Home­steads, whose projects were mostly in south London, built more econom­ical prop­er­ties east of the railway line on 45 acres of Gallants Farm.

The Oakleigh ward is distin­guished by its rela­tively elderly population.

Oakleigh Park was a base for espionage and counterespionage during and after the Second World War. The Soviet Union’s Tass news agency operated a radio monitoring station at The Lodge in Oakleigh Park North from 1941 to 1951. The Admiralty set up a base a few doors down at Tower House, allegedly so that they could keep an eye on the Russians and also for use as a safe house. Both buildings have since been pulled down and replaced by flats, and it is further alleged that the government overruled Barnet council’s objections to the demolition of Tower House so that its secrets might be buried forever.

* The picture of Oakleigh Park South at the top of this page is adapted from an original photograph, copyright Stephen McKay, at Geograph Britain and Ireland, made available under the Attribution-ShareAlike 2.0 Generic Licence. Any subsequent reuse is freely permitted under the terms of that licence.