The Queen of Time, Selfridges

In the days before mobile phones it was common practice to arrange a rendezvous beneath some well-known clock and in October 1931 Self­ridges unveiled what one writer called ‘London’s newest meeting place’. Other commen­ta­tors hailed it as ‘one of the sights of London’ and a ‘horo­log­ical master­piece’. Nowadays most Oxford Street shoppers barely notice it.

Several reputable websites claim the clock was created as early as 1908 but even the first (the eastern) part of the building wasn’t completed until 1909 and at that time Harry Gordon Selfridge envisaged an entirely different central feature, with a large dome crowning the storefront.

The western and (ulti­mately domeless) central sections both had to wait until after the First World War, opening in 1920 and 1926 respec­tively, by which time the architect Albert D Millar had conceived the idea of a clock and sculpture grouping.

The statue of the Queen of Time standing on the prow of the Ship of Commerce and attended by nymphs was the work of Gilbert Bayes, a leading exponent of the New Sculpture movement, which influ­enced Alfred Gilbert’s statue of Eros in Piccadilly Circus.

Bayes at first planned to create his 11-foot-tall queen in terra­cotta but he even­tu­ally chose to use bronze, decorated with gilding, blue faience and Doulton stoneware.

A note about Mr Selfridge

An extra­or­di­nary number of people have read the article above. In the first three months of 2016 this page received more hits than any other on Hidden London – and all because the Queen of Time featured in the opening episode of season 4 of the tele­vi­sion drama series Mr Selfridge. There was a massive leap in traffic when the show first aired on ITV in early January, and another spike (about half the size of the first) when it premiered on PBS in America in late March.

Although the statue is of course real, almost all the tele­vi­sual circum­stances of its creation seem to have been fabri­cated for dramatic effect. To the best of Hidden London’s knowledge, the Queen of Time was not intended as a tribute to womanhood, no reac­tionary press baron objected (unlike those who objected vehe­mently to Eros), and Harry Selfridge certainly didn’t meet with any kind of misfor­tune at the unveiling ceremony (which, as the article states, took place in 1931, not 1928, the year in which the episode was set). 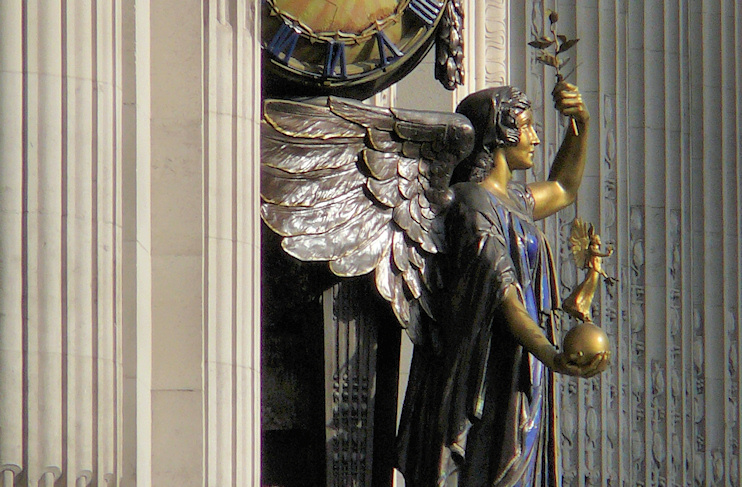