Rolling out the ceremonial barrel

Ceremony of the Constable’s Dues, Tower of London

In the Middle Ages the officers of the Tower of London extracted all sorts of excise duties and payments in kind from the captains of vessels sailing up the Thames to the City. Many of the payments weren’t much more than legalised bribes for supposed protection.

As river traffic became ever more dense – and a spirit of fair dealing increas­ingly prevailed – such demands were progres­sively reduced and ulti­mately done away with alto­gether, with the exception of a single cere­mo­nial remnant.

Once or twice a year, when the appro­priate oppor­tu­nity arises, the crew of a visiting warship presents a keg of rum, brandy or fine wine to the constable of the Tower in an elaborate and ancient ritual of the kind the British proudly believe they do better than anyone else.

Very recently, foreign frigates have begun to partic­i­pate, beginning with the USS Haly­burton in 2009 and contin­uing the following year with the French destroyer Latouche-Tréville.

The ceremony commences with the ship’s captain leading his men and women to the outer gate of the Tower, which is promptly slammed shut in his face by an axe-wielding yeoman warder – as shown in the photo­graph below. The captain explains that his sole intention is to bestow a small barrel of booze upon the Beefeaters, whereupon he is welcomed with open arms and he leads his crew on a circuit of the Tower precincts, accom­pa­nied by a marching band. Two matelots carry on their shoulders a large oar from which the keg is suspended.

The partic­i­pants wind up on Tower Green, where they are met by the constable of the Tower, speeches are made – in the languages of both the visitors and the hosts, if these differ – and the bounty is conferred. The constable delivers a few words of thanks and rapidly disap­pears inside the Queen’s House with the captain and a select group of digni­taries to while away a pleasant hour, and the crew return to their vessel.

Given the infre­quent and irregular timing of the ceremony and the dearth of advance publicity, would-be spec­ta­tors will either need to be partic­u­larly persis­tent in their inves­ti­ga­tion of plans for the next event, or hope to strike it lucky on a day when they’re visiting the Tower. However, other events are held here on more depend­able occasions, notably the Ceremony of the Lilies and Roses, at which the provosts of Eton College and King’s College, Cambridge, lay floral emblems on the spot where Henry VI, who founded both insti­tu­tions, is said to have been murdered on 21 May 1471. 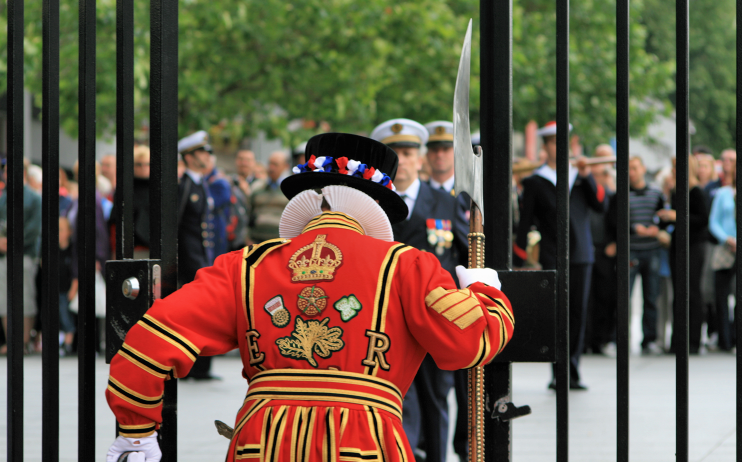