This is not the repos­i­tory of the Crown Jewels, which are stored in the Jewel House (formerly also known as the Jewel Tower) at the Tower of London. However, Westminster’s Jewel Tower was orig­i­nally built to accom­mo­date the royal valuables, as a branch of the King’s Privy Wardrobe.

On the recom­men­da­tion of William Usshe­bourne (or de Husse­borne), keeper of the Privy Palace, Edward III appro­pri­ated a plot of land from West­min­ster Abbey and raised an L‑shaped tower with a polygonal stair-turret on the north side, surrounded by a moat that would provide protec­tion from fire and thieves. The tower was designed by Henry Yevele, the leading architect of the day, and built in 1364–6 from Kentish rag-stone, 98 boatloads of which were shipped from Maidstone. Usshe­bourne stocked the moat with fresh­water fish and is said to have choked to death while eating a pike caught there. The abbey’s monks appar­ently took a somewhat unseemly delight in this tragedy, which they were convinced was a retribu­tive act of God.

One room of the Jewel Tower was briefly used as a prison in 1450 when the Duke of Suffolk was trans­ferred here from the Tower of London, where he had been held on a charge of treason. The Jewel Tower made for a compar­a­tively comfort­able jail-house and was conve­niently located for visits from sympa­thetic members of the House of Lords. The consid­erate nature of this transfer was perhaps a reflec­tion of the weakness of the evidence against the duke and the charge was soon dropped.

After a fire at the palace in 1512, when Henry VIII abandoned West­min­ster, the majority of the royal jewels were moved elsewhere and the tower became a store­house for the king’s plentiful collec­tion of apparel. From the end of the 16th century the Jewel Tower was used by the House of Lords as a depos­i­tory for Parlia­men­tary rolls and the level of protec­tion was enhanced in 1619 by the addition of a fireproof stron­groom on the first floor. This had the prov­i­den­tial conse­quence of preserving the Lords’ records when the Palace of West­min­ster burned down.

By the early 18th century the upper part of the tower was in a dilap­i­dated state and it was restored in 1718 under the aegis of the clerk of works for West­min­ster, Nicholas Hawksmoor, who also had the windows reshaped, giving them round arches.

In 1864 the Parlia­men­tary documents were moved to the new Palace of Westminster’s Victoria Tower and the Jewel Tower subse­quently served as the Office of the Standards Depart­ment, housing the official weights and measures. The tower was damaged during the Second World War, and was after­wards restored and opened to the public. Its features include 13th-century ceiling carvings from the old Palace of West­min­ster, an unaltered 14th century ribbed vault and exhi­bi­tions of historic weights and measures and on the the history of Parliament.

Since 2013 an exhi­bi­tion covering all three floors of the Jewel Tower has high­lighted its history and changing role over the centuries. Features include a model of the medieval palace of West­min­ster, replicas of precious objects and areas of set dressing, including an 18th-century clerk’s office. 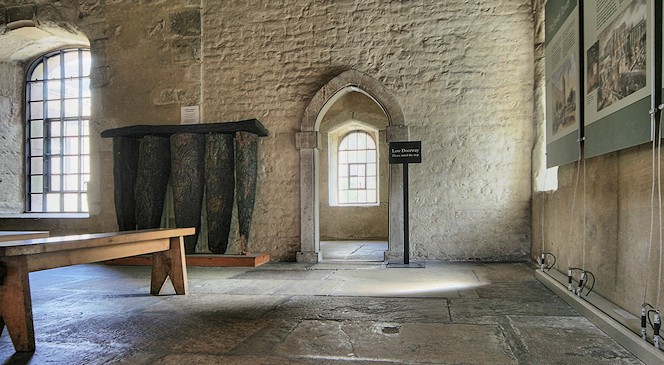