For the most part, a (now) unfashionable collection of cul-de-sacs located on the south-western side of Penge 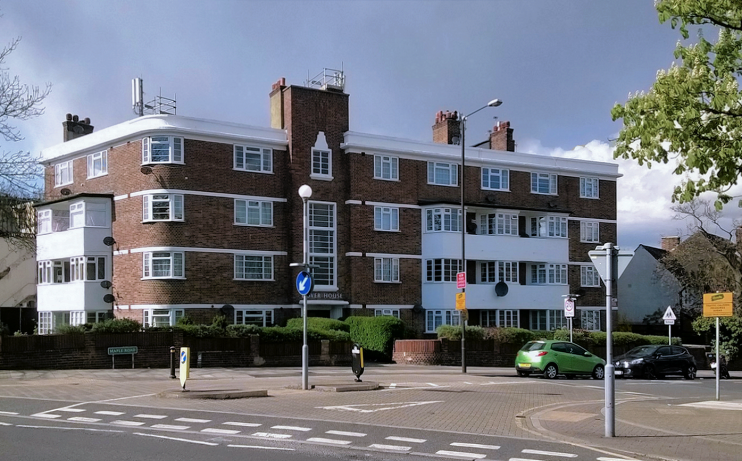 This locality was a feature­less and unin­hab­ited part of Penge Common until the Croydon canal wound its way through in 1809. The common was enclosed in 1827 and the turnpike trust extended Clays Lane (now Elmers End Road and Anerley Road) across it.

Taking advantage of the enclosure and the new access route, William Sanderson, a Scottish silk manu­fac­turer, imme­di­ately bought a large tract of land and built himself a house that he called Anerley (later Anerley Lodge) – a northern English and Scottish dialect word meaning ‘solitary’. The house’s former location is marked with a big pink pin on the map below.

When the canal closed and the newly created London and Croydon Railway Company sought to lay its tracks across Sander­son’s land (taking a straighter route than had the canal), it is said that he demanded a halt for his own use in trav­el­ling up to London. Anerley station opened in 1839, ulti­mately giving its name to the settle­ment that slowly grew up nearby.

The station was rebuilt during the widening of the main line in 1849–50. The recon­struc­tion of the Crystal Palace on Sydenham Hill in 1852–4 stim­u­lated the devel­op­ment of its catchment area.

For a while, a section of the old Croydon canal remained beside the station, attracting anglers and visitors to the Swiss-style Anerley Arms and tea gardens that adjoined the station. The gardens’ delights included a maze, boating on the canal and “the addi­tional attrac­tion of dancing on a ‘monster platform’ on summer evenings.”

In 1855–6 a Congre­ga­tional chapel was built “near the noted tea gardens” on a site formerly occupied by “a ship on which they used to train the boys for sea.”

Anerley Methodist church opened for worship on Station Road in 1865 – but it was at first called the Penge Wesleyan church because Anerley’s name had not yet taken root. The present incar­na­tion of the church was built on an adjacent site in 1878–9.

Also in 1865 the Anglican church of St Paul’s was built on Hamlet Road, in the locality then sometimes known as Upper Penge. In his Guide to English Parish Churches, John Betjeman called its archi­tec­ture “very mad Gothic” – and had nothing further to say on the subject. The church survived for just over a century before being knocked down (despite protests) and replaced by the present St Paul’s, which has a “lofty octagonal worship area.” 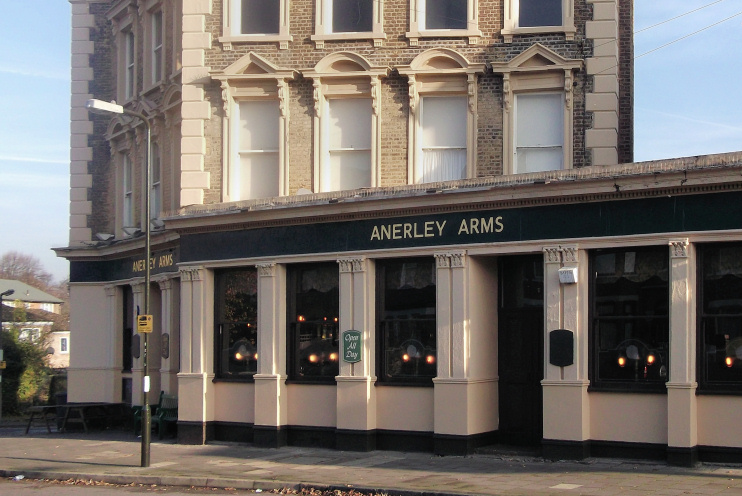 The tea gardens closed in 1868 and the Anerley Arms was later rebuilt, as shown in the photo above. The Anerley Lodge estate was sold off in two phases after William Sanderson’s death in 1871.

Holy Trinity church opened in 1872 on the corner of Croydon and Anerley Roads. It was bombed out in the Second World War and replaced by flats.

Penge vestry hall was built on Anerley Road in 1878 and became the town hall for the Penge urban district council on its creation in 1900. The town hall was enlarged in 1911 and again in 1925, when a library and petty sessional court were added.

The Roman Catholic parish of St Anthony of Padua, Anerley, was estab­lished in 1878 and an iron church was built in Genoa Road. This was replaced by a permanent structure twenty years later, which was in turn succeeded by the present church in 1927.

In 1883 the New (Sweden­bor­gian) Church was built on Walde­grave Road (just beyond the upper left edge of the map below). Remark­ably, it was the first church in the country to be built in concrete – with the addition of a pink pigment to create a terra­cotta effect. A few years after its centenary cele­bra­tions the church was sold and converted to the flats of New Church Court.

Betts Park opened in 1928 on land donated by Frederick Betts in memory of his late mother. In 1934 the council made ‘improve­ments’ to the park’s section of the old canal, severely impairing its aesthetics, though these defi­cien­cies are now disguised by the profusion of trees on its banks, as shown in the photo below. 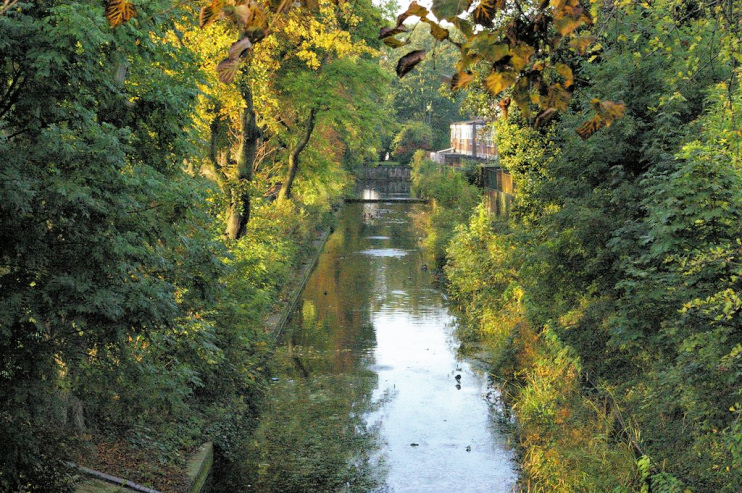 As housing density increased, Anerley progres­sively declined in desir­ability, Victorian prop­er­ties were divided for multiple occu­pa­tion and some blocks of flats were built. This is now one of the densely most populated parts of the borough.

The Anerley Arms was badly damaged by a gas explosion in 1978 and was boarded up and left for dead by its then owners, Char­ring­ton’s. Samuel Smith’s bought the derelict building a year later. The Yorkshire brewery used tradi­tional materials to restore the interior to a semblance of its Victorian appear­ance (deceiving at least one reviewer on TripAd­visor).

Following a merger in 2009 the Anglican parish of Anerley now incor­po­rates St Paul’s (rebuilt in 1978) and Christ Church (built on Anerley Road in 1990) and extends across most of the Crystal Palace area as well as Anerley itself.

Anerley town hall is presently the home of the Crystal Palace Community Devel­op­ment Trust, which hosts a youth club, art club and business facil­i­ties, as well as offering two halls for hire. The library that was based here closed in 2014.

Anerley is now a cultur­ally diverse locality. At the James Dixon primary school a majority of pupils are from a range of minority ethnic back­grounds. “The largest groups are of white British, African, Caribbean and ‘any other white’ heritage,” according to Ofsted.

In The Adventure of the Norwood Builder (1903), Sherlock Holmes’s client John Hector McFarlane spends a night at the Anerley Arms – and discovers in the morning that he is wanted for murder.

The poet Walter de la Mare lived at three houses in the Anerley area from 1899 to 1925, including Thornsett Road, where his next door neighbour was the plumber Thomas Crapper.

* The pictures of Dover House, Maple Road and the Croydon Canal remnant in Betts Park on this page are adapted from original photographs, copyright Christopher Hilton, and the picture of the Anerley Arms is adapted from an original photograph, copyright David Anstiss, all at Geograph Britain and Ireland, made available under the Attribution-ShareAlike 2.0 Generic Licence. Any subsequent reuse is freely permitted under the terms of that licence.