A less favoured corner of the London Borough of Bromley, lying on the south-eastern side of Crystal Palace Park 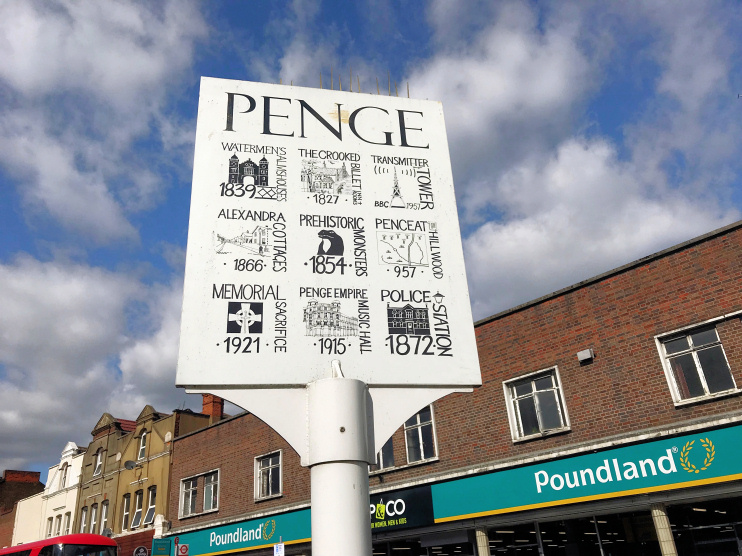 The name Penge derives from Celtic words meaning ‘head of the wood’; Pencoed in Wales has exactly the same origin. This is one of the few Celtic place names in London and suggests the survival of a native British contin­gent after Anglo-Saxon colonisation.

In 957 King Eadwig (or Edwy All-Fair) granted the manor of Battersea to ‘Lyfing, his faithful minister’, together with swine pasture at Penge, which remained a detached portion of Battersea parish for more than a thousand years.

Gypsies continued to make camp in the woods here until the early 19th century, when the construc­tion of the Croydon canal brought day-trippers to Penge and Anerley, and then the first residents after the enclosure of the common in 1827. The canal was replaced by a railway in 1839 and Penge (now Penge West) station opened but soon closed again, owing to the lack of passengers.

Almshouses for retired members of the Worshipful Company of Watermen and Lightermen were built in 1840, “when Tudor was the inevitable style,” as Pevsner puts it, adding that “Penge is for most people a joke, an epitome of the dreary suburban non-place. It is a repu­ta­tion not quite deserved [faint praise?], and a journey down the hill to the High Street yields several buildings worth a look.” These include another set of Tudor-style almshouses: Philip Hard­wick’s King William Naval Asylum, which was paid for by Queen Adelaide and founded in 1847.

The church of St John the Evan­ge­list was conse­crated in 1850, when the popu­la­tion of the village had risen to over a thousand, including the residents of the two groups of almshouses. Soon after­wards, the relo­ca­tion of the Crystal Palace to Sydenham brought explosive growth to the area. The station reopened in 1863 and the London, Chatham and Dover Railway opened another station in the same year, which lay within Beckenham and is now called Penge East.

In 1866 the Duke of West­min­ster sold Porcupine Field on favourable terms to the Metro­pol­itan Asso­ci­a­tion for Improving the Dwellings of the Indus­trious Classes. The charity laid out its only ‘country estate’ here, which it named after Alexandra, Princess of Wales.

The Alexandra recre­ation ground was laid out by the council in the late 1880s and opened c.1891. 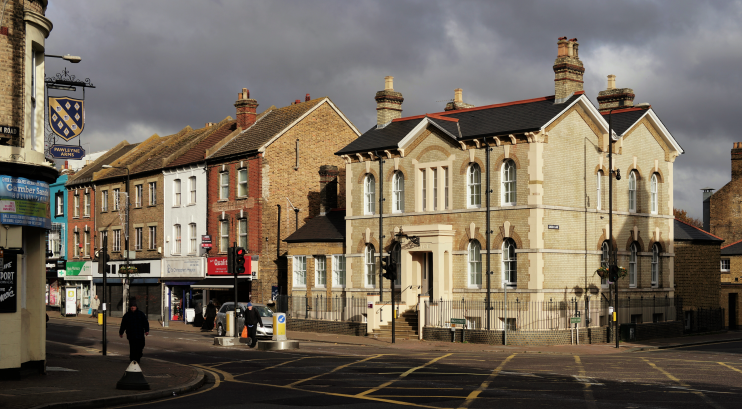 Because Penge lay on the lower slopes of Sydenham Hill, spec­u­la­tive devel­opers generally built smaller houses than in the heights of Upper Norwood or Upper Sydenham and this contributed to a high density of popu­la­tion. Penge became an urban district in 1900 and was trans­ferred from Surrey to Kent. The area was very badly damaged by bombing during the Second World War and of the several conse­quent recon­struc­tion projects the largest was the council’s Groves estate, now regen­er­ated and run by Affinity Sutton.

According to the 2011 census, only 66 per cent of the residents of the Penge and Cator ward are white (down from 78 per cent in 2001), a very low propor­tion in compar­ison with the rest of the borough of Bromley. The principal minori­ties are of black African and black Caribbean descent.

* The picture of the Penge place sign at the top of this page is slightly modified from an original photograph, copyright Matt Brown, at Flickr, made available under the Attribution 2.0 Generic Licence. The picture of the junction of Penge High Street with Green Lane is adapted from an original photograph, copyright Peter Trimming, at Geograph Britain and Ireland, made available under the Attribution-ShareAlike 2.0 Generic Licence. Any subsequent reuse is freely permitted under the terms of those licences.