The central part of the huge Victorian suburb of Norwood, situated west of Crystal Palace (the two identities overlap and many residents of the east side of Upper Norwood refer to the area as Crystal Palace) 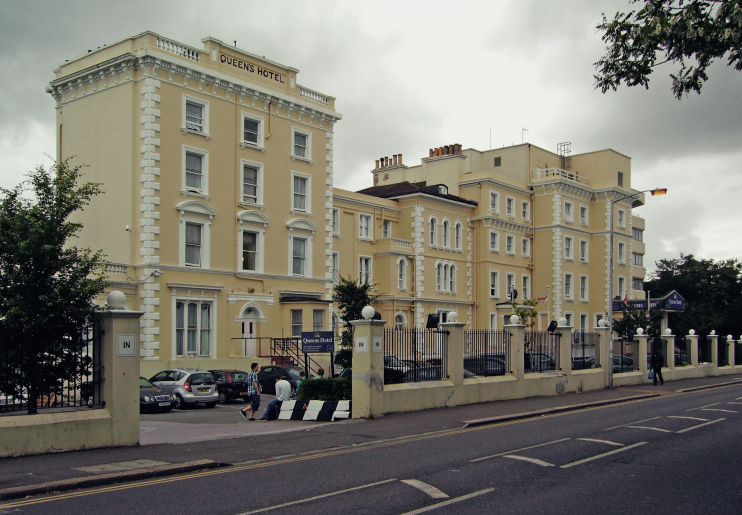 During the first half of the 19th century grand houses with large grounds filled much of Upper Norwood. Only in the Woodland Road area and the triangle formed by Westow Hill, Church Road and Westow Street was housing built for the working classes. By 1845 Upper Norwood had a popu­la­tion of over 3,000.

The recon­struc­tion of the Crystal Palace on Sydenham Hill in 1854 cata­pulted Upper Norwood to the height of fashion as a place of residence. Varied amenities were built to serve tourists, including the Queen’s Hotel, shown in the photo­graph above.* The French novelist Émile Zola lived at the hotel at the end of the 19th century. His photographs of the local area have been collected into a book published by the Norwood Society.

Succes­sively more imposing mansions were built, often with osten­ta­tious orna­men­ta­tion, espe­cially on Beulah Hill. A variety of facil­i­ties met the needs of the more diverse popu­la­tion in the north-east of the district. Westow Street market grew up in the 1880s and operated for around 70 years. Shown in the photo below,* Upper Norwood recre­ation ground was opened to popular acclaim in 1890. 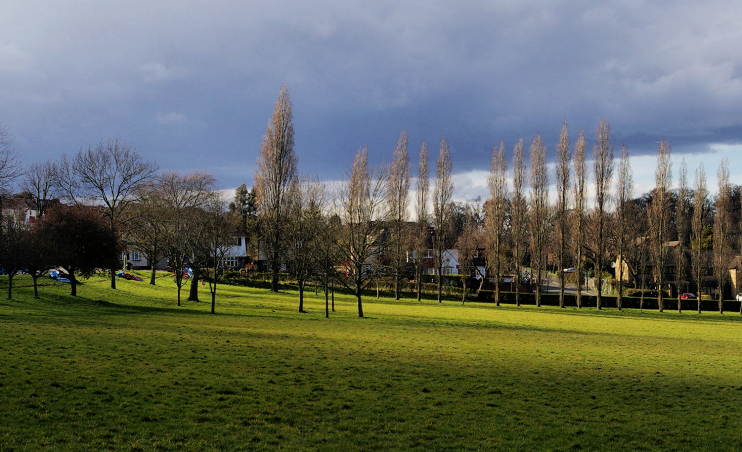 Upper Norwood library opened in 1900 and is jointly owned by Croydon and Lambeth councils but operates inde­pen­dently of both – a unique arrange­ment for a British public library today (but not one that has shielded it from the effects of 21st-century austerity).

As the popu­larity of the Crystal Palace waned, so did Upper Norwood’s appeal to the wealthy, and private devel­opers and Croydon council began to buy up some of the largest houses. Most of the prop­er­ties were still in good condition but changing socio-economic condi­tions had left fewer people able to afford them. Some were converted into flats but builders generally found it more cost-effective to build a whole new street in place of the house and its former grounds.

Despite a century of rebuilding, many of the original villas of Upper Norwood have survived and are protected by a large conser­va­tion area. The Norwood Heights shopping centre was built in 1984 on the site of Barker’s piano store and factory and a Salvation Army citadel.

According to a Daily Mail article published in September 2014, the Queen’s Hotel was at that time block-booked to accom­mo­date asylum seekers who had arrived at Gatwick airport, with “600 migrants crammed into 98 rooms.”

The Upper Norwood ward has a broad spread of ethnic minori­ties, of which the three largest are of white British, black Caribbean and black African heritage. Around two-thirds of homes are owner-occupied.

Towards the end of 1870 Camille Pissarro and his family took refuge in England from the Franco-Prussian war. He stayed in Upper Norwood until June 1871 and painted several views of the locality, including a snowscape at Fox Hill, Upper Norwood, which hangs in the National Gallery.

In Arthur Conan Doyle’s The Sign of (the) Four, Sherlock Holmes solves the mystery behind the murder of Bartholomew Sholto of Pondicherry Lodge, Upper Norwood.

* The picture of the Queen’s Hotel at the top of this page is adapted from an original photograph, copyright SheffGruff, at Wikimedia Commons, made available under the Attribution-Share Alike 3.0 Unported licence. The picture of Upper Norwood recreation ground is adapted from an original photograph, copyright Christopher Hilton, at Geograph Britain and Ireland, made available under the Attribution-ShareAlike 2.0 Generic Licence. Any subsequent reuse is hereby freely permitted under the terms of those licences.