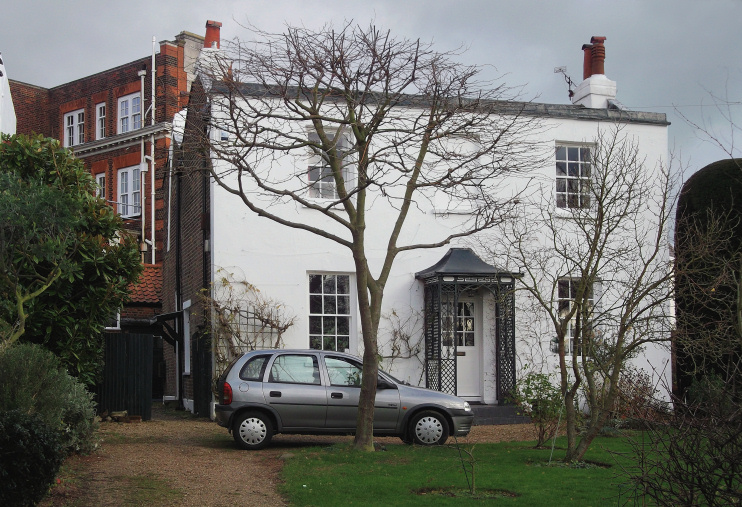 The Great North Wood of Surrey covered the whole of modern Norwood until the 17th century. The wood provided timber for building houses and ships (including the Golden Hind), a liveli­hood for charcoal burners and pig-keepers, and a home for gypsies and squatters. By the mid-18th century defor­esta­tion had created large areas of heathland.

A few late-18th-century prop­er­ties survive on Arnulls Road, near the present Norwood Grove recre­ation ground, including Willow Cottage, which is shown in the photo­graph above.*

From 1799 the enclosure commis­sioners sold or allocated plots of land of varying sizes and entirely new settle­ments arose. Where groups of small plots were sold, as in Lower and South Norwood, working-class housing frequently appeared. Where larger areas were acquired by indi­vidual landowners, for example on Beulah Hill and in other parts of Upper Norwood, substan­tial villas began to be built, although the process did not accel­erate until transport links improved.

With the opening of Beulah spa in 1831 and of the Jolly Sailor station (now Norwood Junction) in 1839, and the relo­ca­tion of the Crystal Palace to Sydenham in 1854, Norwood rapidly filled with homes for the upper middle classes. Working-class enclaves like Norwood New Town provided reser­voirs of tradesmen.

Many of the prop­er­ties were extrav­a­gantly grand and as early as the 1890s some succumbed to rede­vel­op­ment, in the form of demo­li­tion or conver­sion to insti­tu­tional use or into flats.

After the First World War municipal projects altered the character of areas such as Knights Hill and Gipsy Hill.

Council building continued to increase after the next war, peaking in the 1960s when many older prop­er­ties were replaced. Never­the­less, despite the ravages of the 20th century, much of Norwood retains a Victorian air.

Because south London’s major through routes skirt the edge of the district and it lacks a strategic shopping and leisure centre, Norwood is much quieter and less well-known than neigh­bours like Streatham.

James Thomson, who provided the lyrics of ‘Rule Britannia’, praised the rural seclusion of the Great North Wood in his ‘Hymn on Solitude’, published in 1729. ‘Perhaps from Norwood’s oak-clad hill, / When meditation has her fill, / I just may cast my careless eyes / Where London’s spiry turrets rise, / Think of its crimes, its cares, its pain, / Then shield me in the woods again.’

* The picture of Willow Cottage at the top of this article is adapted from an original photograph, copyright David Anstiss, and the picture of the Jolly Sailor, South Norwood is adapted from an original photograph, copyright Nigel Chadwick, both at Geograph Britain and Ireland, made available under the Attribution-ShareAlike 2.0 Generic Licence. Any subsequent reuse of either image is hereby freely permitted under the terms of that licence.