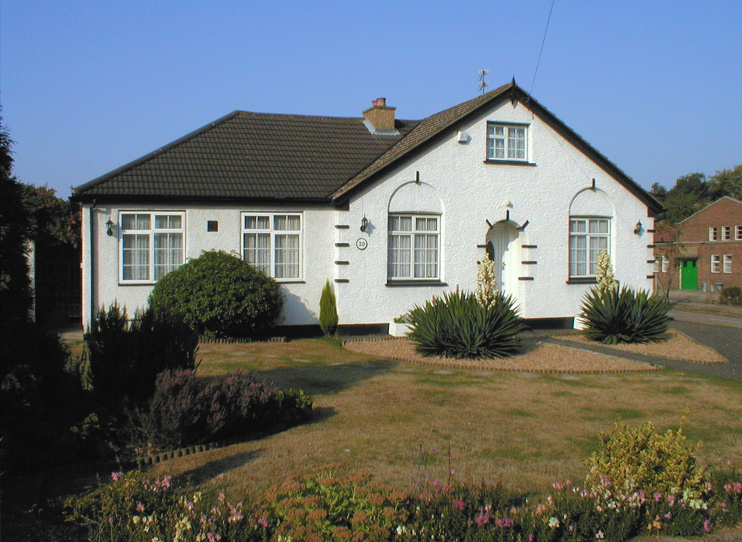 The May Place estate had been in existence since the 15th century and in the hands of the Barne family from 1750. South-west of May Place, Marten’s Grove was a mid-19th century mansion with an orna­mental lake and a winter garden.

In the latter part of the 19th century May Place was occupied by Colonel Frederick Barne, who was also chairman of the Bexley­heath Railway Company. ‘Hurst’ used to mean a ‘woody bank’, but the Barne­hurst name was simply an invention for a station in the middle of nowhere.

Only 15 people lived with half a mile of the station when it opened in 1895 and not a single first class season ticket was sold for over ten years (presum­ably Colonel Barne got his free).

The lane that served the station was called Hills and Holes until the 1920s, when it was renamed Barne­hurst Road and 600 homes were put up on land acquired from Michael Barne. Shops were built on Midfield Parade in 1928.

WH Wedlock, builders of the May Place estate, published a brochure with the intro­duc­tory direc­tions: “When arriving at Barne­hurst by rail from London, cross over the stile into the estate, just outside the station gate.”

The Marten’s Grove estate was sold in the late 1920s and the house was demol­ished in 1932, to be replaced by inex­pen­sive but not unpleasant suburban housing. Land to the north of the house was offered to Crayford urban district council for use as a recre­ation ground (now Marten’s Grove Park), which opened on 1 July 1933. The orna­mental lake was trans­formed into a lido, which ulti­mately closed in 1986.

Wates were among the various other devel­opers to pitch in, laying out the Barne­hurst Park estate in 1933 on land to the south of Mayplace Road. With prices as low as £535 for a four-bedroom house, this was one of the most afford­able new estates in London, although the fourth bedroom was less than eight feet by seven.

The Red Barn public house opened in 1936 and developed a repu­ta­tion as a venue for tradi­tional jazz in the 1940s.

Crayford urban district council acquired May Place in 1938, and what remains of it is now part of the clubhouse for Barne­hurst golf course.

More than a thousand homes were damaged during the blitz, resulting in extensive rebuilding after the war.

The Red Barn remained the only licensed premises in Barne­hurst until the Bird & Barrel opened a few doors away on Barne­hurst Road in April 2018. This Bexley Brewery micropub has a house ale called Hills and Holes.

Modern Barne­hurst is an ethni­cally uniform locality with 90 per cent of residents clas­si­fied as white in the 2011 census (down from 95 per cent in 2001).

The poet Wendy Cope grew up in Barnehurst. ”My parents moved away in 1963. When I visited Erith a few years later, it was unrecognisable. Barnehurst had remained stolidly the same.” [Guardian, 5 May 2018]