An assortment of industry, terraced housing and wilderness on the east side of the River Wandle south of Mitcham Common 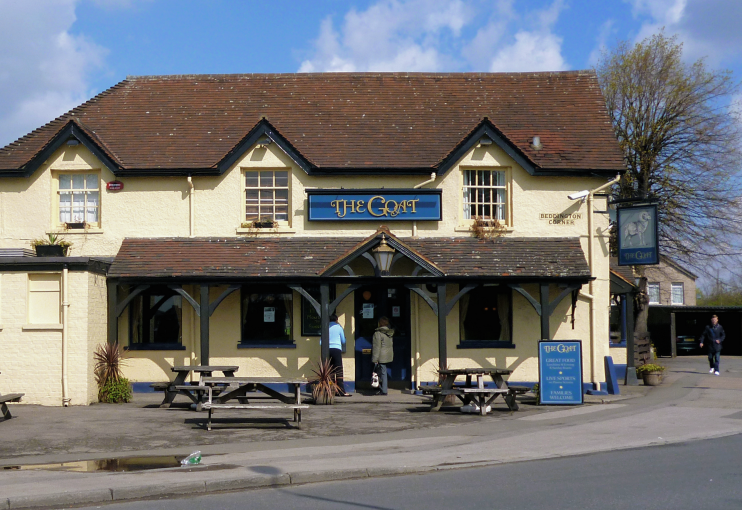 Although the Beddington Corner name is used to denote the junction of Goat Road, Carshalton Road and London Road (also called Goat Corner), the origin lies in its former location at the north-west corner of Beddington parish.

As the London Ency­clopaedia says: “Place naming at this point is indeed very confused, since this part of Beddington became part of Wallington when the parish was formed in 1887; Hack­bridge, also with no official existence, merges with Beddington Corner on the south; and the nearby Mitcham Junction station (over the borough boundary) gives a postal district name to this part of the London Borough of Sutton.”

This locality once had water­cress beds and market gardens, a sweet-smelling lavender and pepper­mint distillery and several malodorous leather tanneries beside the River Wandle. The tanneries inspired the names of the (now vanished) Skinners Arms and (extant) Goat public houses.

In the early 19th century a short branch of the horse-drawn Surrey Iron Railway came through Beddington Corner on its way to Hack­bridge Mills.

A small combined chapel and national school was built on Mill Green in the 1840s. The structure was demol­ished after All Saints church was built on London Road in 1931 (almost opposite what is now BedZED) for the newly created parish of Hack­bridge and Beddington Corner. The architect was Henry Philip Burke-​​Downing, who designed several south London churches, most notably St Barnabas Gorringe Park.

Written in 2007, a London Borough of Merton character assess­ment for the area comments: “Goat Road benefits from eight cottages, one of which incor­po­rates a shop. These prop­er­ties enhance the ‘village’ feel, and serve as an important buffer to the indus­trial character of the Willow Lane indus­trial area at the rear. The character of the remainder of Goat Road is harmed by ware­houses and adver­tising hoardings.”

The acid grassland to the north-east of the Goat public house consti­tutes the part of Mitcham Common known as the Gunsite, because anti-aircraft batteries were placed here during the Second World War. Mill Green has some woodland that was planted in the early 1990s and two water­courses: a ditch that was once part of a branch of the River Wandle and the Beddington Effluent Carrier, which takes treated effluent from the sewage works to the Wandle. The Mitcham Common Conser­va­tors note that: “Although the Carrier is concrete-sided with little wildlife value, the water quality of the treated effluent is much improved in recent years and regular moni­toring has shown that it now supports a range of insects and fish.”

Tom Francis and Eric Montague’s book on Old Mitcham tells of a band of Gallician gypsies that once lived in a field near Willow Cottage at Beddington Corner, before departing for America. When the gypsy leader’s daughter died she was buried in Mitcham churchyard with an elaborate funeral, her body bedecked with gold and silver coins.

* The picture of The Goat on this page is adapted from an original photograph, copyright Dr Neil Clifton, at Geograph Britain and Ireland, made available under the Attribution-ShareAlike 2.0 Generic Licence. Any subsequent reuse is freely permitted under the terms of that licence.
Thanks to Peter Lake for drawing Hidden London’s attention to the 1760 advertisement.