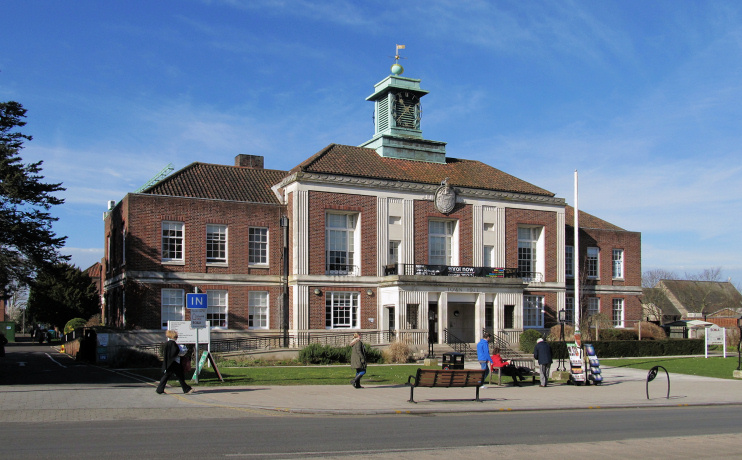 This place’s name was first recorded as Waletona c.1080 and Waletone in 1086 (Domesday Book) and derives from the same root as ‘Wales’, almost certainly denoting an early Celtic settle­ment – an enclave of Britons coex­isting alongside Saxon settlers nearby.

Wallington’s status as a hundred – an extensive admin­is­tra­tive area – indicates its medieval impor­tance, as did the size of its Norman manor, but the village had become Beddington’s inferior by the late Middle Ages. It was part of Beddington parish but had a chapel that was outside the juris­dic­tion of the parish priest in the 16th century, with its own graveyard.

A paper mill was in existence in 1771, later grinding flour and ulti­mately making chocolate. The millpond survives as the Grange Lake, which is located right at the top of the map below. Early in the 19th century the hamlet consisted of just a few cottages and an inn, grouped around the village green, together with a handful of outlying houses.

The construc­tion of the Croydon to Epsom railway in 1847 triggered lasting changes. The owner of the Carshalton Park estate forbade the building of a station on his land, so Carshalton station (now Wallington) was sited here, to the south of the village.

Nathaniel Bridges, lord of Wallington manor, began to lay out an estate of Gothic villas to the east of Manor Road in the early 1860s. Bridges sponsored the construc­tion of Holy Trinity church and Wallington became a separate parish from Beddington in 1867.

Now located in the far south of the district, Wallington high school for girls opened on Manor Road in 1896, having outgrown the Carshalton home of its prede­cessor, the catchily named Church high school of Carshalton, Wallington, Beddington and Sutton (St Barnabas).

Walling­ton’s devel­op­ment was not rapid but by the 1910s the growing town was expanding across the former lavender fields and a new centre had taken shape along Woodcote Road to the south of the station.

Wallington was the larger partner in its 1915 pairing with Beddington as an urban district, and it subse­quently absorbed Bandon Hill and South Beddington.

Wallington county grammar school – as it is now called – opened in 1927 and moved to its present site on Croydon Road in 1935.

Between the world wars many of the largest early-Victorian prop­er­ties were replaced by smaller homes, and a town hall and library were built on and behind Woodcote Road. Other houses on the Bridges estate were replaced by flats after the Second World War.

Shown in the photo­graph at the top of the page,* the town hall later became a crown court and is now a Sutton College centre.

Following the creation of Wallington Square in the 1960s the vicinity of the station became the borough’s second most signif­i­cant commer­cial zone, after Sutton itself, with several office blocks and a shopping centre. This subse­quently faced some of the diffi­cul­ties common to almost all secondary retail desti­na­tions and is presently under­going a phased programme of regen­er­a­tion that includes the construc­tion of blocks of low-rise flats.

At the 2011 census 73 per cent of Wallington’s residents were white British (down from 85 per cent in 2001). More than 70 per cent of homes here are owner-occupied.

The writer and artist Mervyn Peake lived in Wallington as a young man in the 1920s and again in the 1950s, after his father died and bequeathed his house to him.

The rock guitarist Jeff Beck was born in Wallington in 1944.

* The picture of the former Wallington Town Hall at the top of this page is adapted from an original photograph, copyright Richard Rogerson, at Geograph Britain and Ireland, made available under the Attribution-ShareAlike 2.0 Generic Licence. Any subsequent reuse is hereby freely permitted under the terms of that licence. The picture of Guy Portelli’s sculpture ‘English Lavender’ (1999) was released into the public domain by ‘Mucky Duck’.