Also spelt as a single word, Bandon Hill is a railside residential locality without a station, situated on the east side of Wallington 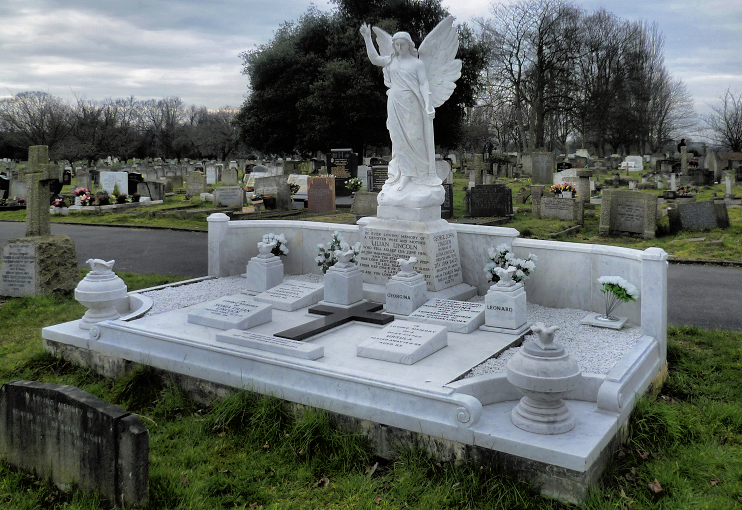 The discovery of Roman funeral urns (in the 1970s) indicates the presence of a burial ground on the site of the present Bandon Hill cemetery as early as the 1st century AD.

The manor of Bandon was first recorded in 1203. There is a slight possi­bility that early resident Roger de Bandon brought the name with him from elsewhere but it is much more likely that he took his surname from this place. Variously spelt Bandon, Bandone and Bendon in the early 13th century, the name would have meant ‘bean down’ – the hill where beans are grown. In the Middle Ages broad beans were an essential foodstuff for the poor. Benhilton, another locality in the borough of Sutton, also gets its name from the culti­va­tion of beans on a hill.

As is often the case with the ‘down’ and ‘hill’ affixes in London place names there is not much of a hill here­abouts, merely undu­lating terrain on the lower dip slope of the North Downs, mostly 50–60 metres (or around 160–200 feet) above sea level.

In the Middle Ages, Bandon was a more important settle­ment than nearby Beddington but all trace of it has vanished and even its exact location is now forgotten. Loosely gathered around a manor house, the village probably lay between Beddington and Waddon.

The tauto­log­ical name Bandon Hill was a later invention, which was applied to the rising ground south of Beddington, to the settle­ment that began to take shape here after the Croydon to Epsom railway line came through in 1847, and to the cemetery that was opened by Croydon rural district council in 1900.

Bandon Hill was an unplanned devel­op­ment, built a few houses at a time by small-scale spec­u­la­tors. The first streets to be filled with homes were Upper Road, the west side of Plough Lane and Beddington Grove Road (now Sandy Lane North), which had an inn. Bandon railway halt brought some commuters during its brief existence from 1906 to 1914.

Bandon Hill primary school’s ‘Meadow Field’ site occupies the original location of St Michael and All Angels church, which had been estab­lished in 1872 and moved west onto Milton Road in 1907. Bandon Hill Methodist church opened in 1912.

The settle­ment expanded progres­sively throughout the 20th century, first westward and then in all other direc­tions until it met the neigh­bouring built-up areas. All available gaps were plugged – except for the cemetery, the Demesne Road allot­ments, a couple of sports grounds and Mellows Park, which has a bowling green and café, among other amenities.

Since 1995, with the exception of graves for cremated remains, new burial rights at Bandon Hill cemetery have only been available for reclaimed graves – which are old graves that have burial space remaining but have not been used for at least 75 years. On 24 March 2006 the cemetery conducted its 30,000th interment.

In addition to its original home on Sandy Lane, Bandon Hill primary school has expanded onto a site on Stanley Park Road (which, by any defi­n­i­tion, is not in Bandon Hill). The school attracted the attention of the national media in 2014 when the head teacher’s salary rose above £200,000. Her remu­ner­a­tion package was subse­quently reduced.

Except in the context of the cemetery and the primary school, Bandon Hill’s name is not widely recog­nised – though it does appear in several street atlases, usually spelt ‘Bandon­hill’. Most residents simply consider this locality to be part of Beddington or (more often nowadays) Wallington.

The African–British composer Samuel Coleridge-Taylor, best-known for Hiawatha’s Wedding Feast, was buried at Bandon Hill cemetery in 1912, following his death in Croydon at the age of 37.

* The picture of the Lincoln monument in Bandon Hill cemetery at the top of this article is adapted from an original photograph, copyright Marathon, and the picture of the chapel buildings at Bandon Hill cemetery is adapted from an original photograph, copyright Robin Webster, both at Geograph Britain and Ireland, made available under the Attribution-ShareAlike 2.0 Generic Licence. Any subsequent reuse is freely permitted under the terms of that licence.