The western side of Croydon, noted for its business and retail parks 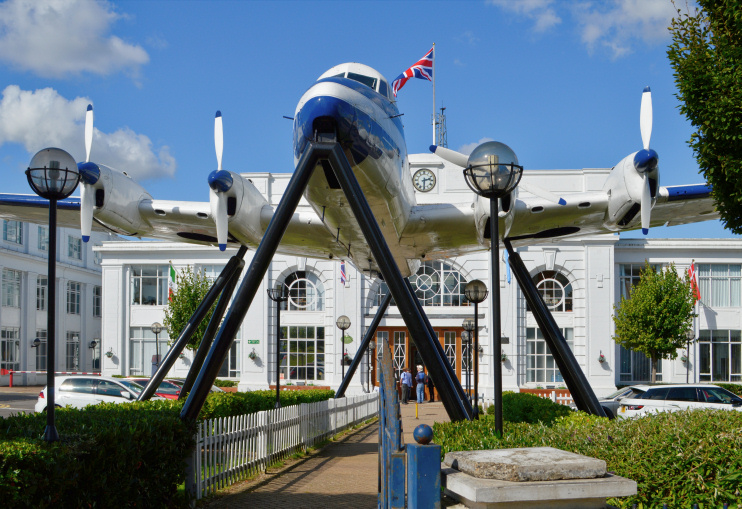 Waddon’s name was first recorded in the twelfth century and derives from Old English words meaning ‘the hill where woad grows, or is grown’. Traces of Bronze Age and Iron Age habi­ta­tion have been found here, including caves.

The Waddon Court estate covered most of the area from the Middle Ages, when mills operated along the River Wandle. The river was later used to irrigate water­cress beds and to feed the extensive lakes of Waddon Court. The first incar­na­tion of the Hare and Hounds public house opened in 1773, on what was then Waddon Marsh Lane.

In the latter years of the 18th century Waddon Court’s eccentric owner, John Dewye Parker, raised a volunteer corps of yeomen here, at his own expense, and “military evolu­tions were performed with the utmost precision, upon the lawn surrounding his mansion.”

Waddon railway station opened on the Epsom branch of the London, Brighton and South Coast Railway in 1863. Four years later Croydon gasworks was built on Waddon Marsh, to the north of the village. An elec­tricity gener­ating station opened in 1896. In that same year free-thinking Chris­tians estab­lished Broth­er­hood House at the former Waddon Hotel on Stafford Road, near the station. It soon after­wards became Morris House, “a home for advanced thinkers and social­ists of all kinds and both sexes … The rooms are large and the household arrange­ments are described as ‘middle-class, but demo­c­ratic’ – members of the family taking a share of the domestic work,” according to an adver­tise­ment.

Adjacent aero­dromes were opened at Beddington and at the southern end of Waddon during the First World War (when military aircraft were manu­fac­tured here) and in 1920 these were amal­ga­mated to form Croydon Airport.

The airport’s clas­si­cally-inspired terminal building and the Aerodrome Hotel (now the London Croydon Aerodrome Hotel) opened on Purley Way in 1928, in time for aviator Amy Johnson’s pioneering solo flight from Croydon to Darwin, Australia, in 1930.

The creation of Purley Way as Croydon’s ‘relief road’ brought dozens more factories to the area, while Croydon corpo­ra­tion built the Mitcham Road and Waddon housing estates. The corpo­ra­tion acquired 150 acres of land opposite the airport for use as sports fields.

A second power station – Croydon B – opened in 1950. Around this time industry oblit­er­ated the last water­cress beds of Waddon Marsh. The power station’s 300-​​foot-​​tall chimneys are shown in the photo on the right.

The remainder of the Waddon Court estate was sold for housing, together with the grounds of neigh­bouring Waddon Lodge. Here too, the corpo­ra­tion stepped in – to preserve surviving parts of Waddon Ponds for public use.

During the Second World War Croydon Airport was converted to military use and it closed perma­nently in 1959. The Imperial Way indus­trial estate filled much of the eastern side of the site, while Sutton council built the Roundshaw estate on the part that lay within its borough. Shown in the photo­graph at the top of the page and marked with a big pink pin near the bottom of the map below, Airport House now has serviced offices and an infre­quently opened visitor centre.

Industry began to withdraw from Waddon in the 1970s and the Croydon A and B power stations were decom­mis­sioned in 1973 and 1984 respec­tively. Waddon pumping station’s two steam engines were shut down in 1983 and the older of the pair is now on show at the London Museum of Water and Steam.

Most of the disused indus­trial sites have since been filled by ware­houses and super­stores, espe­cially along Purley Way, where hotels and leisure venues have also flour­ished. The largest of the devel­op­ments is Valley Park, where an Ikea store opened in 1997 – retaining the chimneys of Croydon B power station beside Ampere Way.

Waddon Marsh tramlink stop opened in 2000, near the site of Waddon Marsh station, which had operated from 1930 to 1997.

Recently, Waddon’s most signif­i­cant resi­den­tial project has been Barratt Homes’ New South Quarter, between Purley Way and Wandle Park. The photo above shows Wandle Park in March 2015, “following an extensive and expensive make-over.”

The resi­den­tial part of Waddon has a typical demo­graphic profile for the borough, except that it is a little less affluent and has slightly more inhab­i­tants who are single and live in council housing. At the 2011 census, 46 per cent of residents were white British. The next largest ethnic sub-groups were of black African and black Caribbean origin or descent.

Lord Nelson is said to have visited Waddon Court and to have fished in Waddon Ponds.