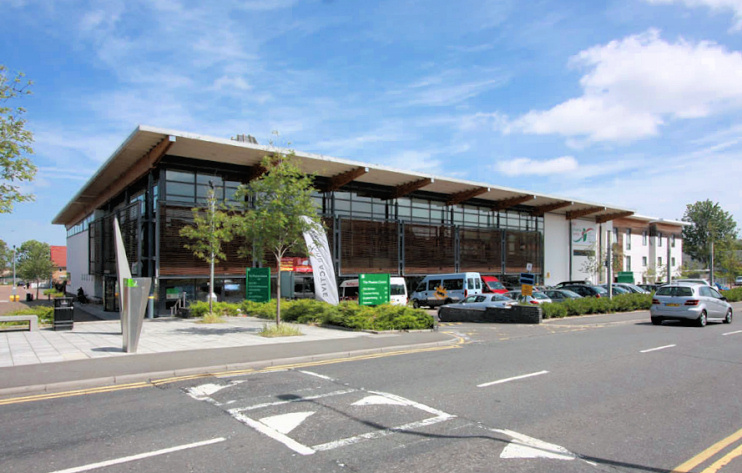 After the Second World War Roundshaw Park was created at the western edge of Croydon Airport, serving as an amenity for the residents of South Beddington (nowadays thought of as part of Wallington). The park was named after the Round Shaw, a clump of trees that were once surrounded by open farmland but now consti­tute the north-west tip of Roundshaw Park’s woodland.

The Roundshaw estate was built in 1965–7 and named after the park. The names of the estate’s streets – and some of its buildings – commem­o­rate aviation companies, aircraft and indi­vidual pioneers asso­ci­ated with Croydon Airport.

Roundshaw’s first tenants came from within the borough but the Greater London Council later took respon­si­bility for part of the estate, rehousing East Enders here. Although unpopular with its neigh­bours, Roundshaw was at first perceived as a ‘luxury estate’, with spacious accom­mo­da­tion and centrally supplied heating and hot water. Rents were rela­tively high.

To the south, the Apeldoorn estate was built privately on council land in the 1980s but its house prices were out of the reach of most Roundshaw tenants.

Within a decade of the Roundshaw estate’s construc­tion defi­cien­cies in build quality had become obvious, and anti­so­cial behaviour led to (exag­ger­ated) talk of a ‘no go zone’ in the late 20th century.

Over 1,000 high-rise pre-cast concrete units were demol­ished and replaced with a similar number of low-rise houses and flats built in tradi­tional street patterns, allowing all the current residents to remain on the estate if they wished. A further 674 low rise homes were retained and refurbished.

The Phoenix Centre (shown in the photo­graph at the top of the page*) opened in September 2004, providing a leisure centre, youth zone, library, café and community hall all under one roof.

The estate’s 1,700 prop­er­ties are now managed by Roundshaw Homes (a part­ner­ship between Metro­pol­itan and the Hyde Group) and include 1,400 homes for rent and 120 shared ownership homes, of which 50 are reserved for key workers.

Roundshaw Downs (in the south-east corner of the map below) is a local nature reserve covering about 94 acres, the largest area of unim­proved chalk grassland in the borough. Most of the downs were once part of the airfield. Kestrels and skylarks are among the birds that have replaced planes in the skies above.

Paralympic athlete David Weir is a Roundshaw resident. The postbox in Mollison Square was painted gold in honour of his multiple medal winning performances at the 2012 Paralympics. Weir has also been a regular competitor in the London Marathon, which he won for a record-equalling sixth time in April 2012.